There are close parallels between the lives of  Alick Isaacs and Richard Silver.

Like Isaacs, Silver’s father, was driven from his home in Russia by anti-Semitic riots.  As a child of nine, the youngest of a large family,  he arrived at Ellis Island in 1909 without speaking a word of English.  In Russia, following the revolution of 1905, widespread unrest and violent anti-Semitism led to pogroms in Kiev, along with Bialystock, Odessa, and Kishniev.  Instead of settling in a working class district of Glasgow, like the Isaacs, the Silver family, including nine year old Benjamin, got started in the New World ghetto of  New York’s Lower East Side, on Eldridge Street.

Benjamin Silver worked his way through Brooklyn Polytechnic earning his civil engineering degree and started work on the New York City subway system.  Both there and as an engineer working on the George Washington Bridge he ran across the same anti-Semitism that drove the family out of Russia.  He quit and became a successful independent contractor building apartment houses.

His younger son Richard, a promising clarinetist at NYC’s prestigious High School of Music & Art — who attended music Camp Onotoa as a child where Leonard Bernstein was a counselor —

started to follow his father into engineering but was curious about medicine, a career his older brother Norman had embraced.

On a lark, Richard applied to Cornell Medical School in his junior year and was accepted, thus merging his path into the history of interferon, a channel Alicks Isaacs would soon open in London.

Just two years before Isaac’ famous experiment with Lindenmann proving the existence of interferon, the newly minted physician Richard Silver was swept up into the Korean War draft. He couldn’t get into the service because all the slots for doctors were taken in 1954.

The draft age residents at Cornell, however, were ordered to go into the service.  “So  I went down to Washington to make the rounds,” said Silver, “and visited the Air Force which did have openings for a flight surgeon. You have to jump out of an airplane. That sounds like fun, I said. I was 26…why not?”  The problem seemed solved up to the physical that he failed due to nearsightedness.  Since it was essential for him to participate in the draft to continue his appointment as a resident at Cornell, he asked his Chairman of the Department of Medicine for an available alternative. Which is where fate took a hand in shaping his future.

Working in research as a member of the Commissioned Corps of the U.S. Public Health Service at NIH was one alternative and Silver opted for the Heart Institute.“Out of the question,” said the Chief. “The only opening is in the Cancer Institute.”  To Silver, cancer was the “gulag of medicine where terrible things happened and people died.”  Reluctantly, with little choice, he started work at NIH. He little dreamed his work there would soon lead him to a commanding role in research and clinical practice in both hematology and oncology and help bring Isaacs’ interferon into the mainstream of MPN therapy.

Dr. Richard Silver was the pioneer in IFN-research in PV in the U.S., publishing the first report in 1988 . Since then he has contributed significantly with several classical papers on interferon in MPNs. Recently Dr. Silver and his colleagues from Weill College have also shown that even patients with hypercellular myelofibrosis may benefit substantially from this treatment. 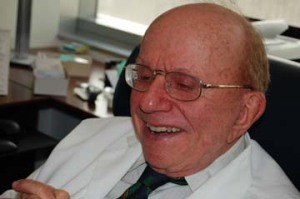 We claim Dr. Richard Silver for our own, considering him the dean of MPN hematology, ignoring the major thrust of his work in his specialization, clinical oncology. He has done important work in Hodgkins disease, chronic myeloid leukemia with Brian Druker and breast cancer… apart from the myeloproliferative neoplasms with which he is most closely associated.

In 1970, scarcely 15 years after he completed his Cornell residency, Richard Silver, already an Associate Professor of Clinical Medicine at Cornell Medical College, wrote Morphology of the Blood and Marrow in Clinical Practice.

Of this work,  William Dameshek, the first to characterize ET, PV, and MF as three forms of myeloproliferative disease, a single, related, clonal disorder, wrote in his foreword, “This book is the product of great experience in clinical investigation and in the practice of hematology….”

Silver’s letter to the editor in Lancet (1988) on recombinant interferon alpha for PV preceded by a year his seminal monograph (with Dr. Harriet Gilbert) on Intron A (interferon alfa-2b recombinant) in the management of myeloproliferative disorders.  Together these publications mark the beginning of interferon’s rise to prominence in MPN therapy. These works were published at a time interferon was largely used as an anti-viral and anti-bacterial medication and in anti-tumor therapies  with applications in various cancers. Recombinant interferon — the end stage of cloning human interferon and genetically fusing it with another, fast growing organism like yeast or bacteria — first became available after 1980, and Silver’s work in applying these substances to relieve MPN symptoms opened the door to a flood of combinatorial research and clinical trials going on to this day.

Silver’s role in bringing interferon to MPN therapy cannot be over-stated. He has been relentless in clinical investigation, research and publishing. Although his earlier focus had been mostly the acute leukemias, he turned his attention back to the MPNs describing long-term interferon treatment options for polycythemia vera in Seminars in Hematology (1997). As a member of both the Polycythemia Vera Study Group and the International Working Group for Myelofibrosis Research and Treatment he  researched, wrote, spoke and published on interferon throughout the past two decades in a prolific and intense campaign to gain acceptance of interferon as a front-line therapy. In 1999, Silver was also Chairman of the Guidelines Committee of the American Society of Hematology comparing interferon therapy –which was standard for the treatment of CML– to marrow transplantation and hydroxyurea and busulfan.

In 2009 he published two milestone papers, a Letter to the Editor of Leukemia describing how recombinant interferon alpha could retard progression of early primary myelofibrosis. In this letter he presented results of research demonstrating interferon’s ability to improve bone-marrow fibrosis and control splenomegaly and reduce production of megakaryocytes as well as inhibit thrombopoietin signaling — all components of MF.  This at a time there was thought to be no drug available for relief of MF.

An expanded version of the letter appeared in Blood in 2011 along with a foundation letter in the Journal of Clinical Oncology, written with Hans Carl Hasselbalch and Jean-Jacques Kiladjian, “Interferon Alfa in the Treatment of Philadephia-Negative Chronic Myeloproliferative Neoplasms.”

These studies, along with the The Expert Reviews article written by Silver, Kiladjian and Hasselbalch, published last month (Part III, below), are the Interferon Papers, the summing of contemporary understanding of the interferons in treatment of MPNs.

There is no last word in scientific research.  But with the appearance of this comprehensive review of the interferons in MPN clinical practice the trajectory from the Room 216 in the Isaacs-Lindenmann lab through Silver’s Weill-Cornell offices in the towers New York City  to hematology clinics and examination rooms worldwide has been completed.