PRM-151 –Can fibrosis be reversed?  Verdict in clinical trial.

When Dr. Srdan Verstovsek read a report in a thoracic journal about a new drug to reverse fibrosis in pulmonary fibrosis, a lung disease, he had an idea.  If it could work in the lung why wouldn’t it work in the bone marrow?    He had seen the effects of myelofibrosis in countless bone marrow biopsies, the network of reticulin strands and buildup of collagen that clogged the blood production system. There was no good drug to stop the progress of myelofibrosis.

He had worked with drugs that interrupted the signaling pathways creating overproduction of blood lines. No drug was available to stop MF at its still unknown origins in the blood-bone niche but it might be possible to impact the disease at its end point, in the marrow capsule.

He called Promedior and suggested they talk about a clinical trial in myelofibrosis.

outlined the conservative approach to the trial and its endpoints.

The first smaller stage of this trial was planned to take about six months. “24  patients will get at least six months of treatment,” said Dr. Trehu. “ If it works they can stay on indefinitely. The second  part of the trial will be much larger and involve completely new people  It’s called adaptive because we may have different schedules of the drug, different regimens in the two stages.”

The results are in from this first stage

The clinical trial design  took into account a curious  phenomenon Promedior observed in early studies.  It appeared its drug, PRM-151, was equally effective whether administered once a week or once a month.  Since this would make a difference to patients traveling to the infusion center for the drug, they set up two dosage arms.  Simultaneously, this was an opportunity to take a preliminary reading of PRM-151 in combination with Jakafi, a drug with well documented impacts on splenomegaly and constitutional symptoms.

The Promedior trial design incorporated four arms (see scorecard, below) and criteria for judging success.  “Since this exploratory study is the first time we tested the drug in patients with myelofibrosis,”said Trehu, “we needed to see if the drug results in clinical benefit in this first part of the study, just to give us an assessment on whether or not the drug appears to be helping patients.  In order to move forward in the next stage, we required a patient show response in each of the four arms of the trial.”

And since the main thrust of the trial was to see if PRM-151 would affect bone marrow fibrosis, they set up rigid criteria in that area as well.  A decline in bone marrow fibrosis by one or more grades must be followed by a confirming  bone marrow biopsy 12 weeks later in order to be considered valid.  Moreover, biopsy results were read by local pathologists at the host institution and then sent on to a central, blinded, panel of experts for review.  The blinded central reading is pending.

In all 27 patients participated in the trial. There were bone marrow and symptom responses in each arm. meeting requirements for stage two.  Here’s the score card: 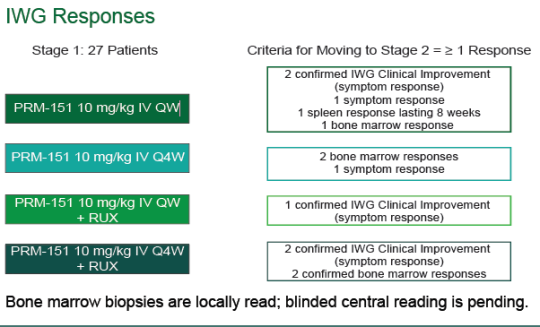 “I feel very good about this,”said Trehu. “We met our criteria for moving forward  We showed the drug is safe. We showed it’s having a clinical benefit for patients. And so we’re very excited about taking it forward in MF.”

A closer look at the poster presented at ASCO earlier this month, provides patient results.( Click on the graphic to enlarge; the full poster is available at PRM-151-myelofibrosis-ASCO-2014)

“The second stage of the study will look different depending what we learn from this study,” said Trehu.   This exploratory first step has given us enough data to know we’re going to proceed with the second stage, the goal is to confirm the efficacy signals. We’re very encouraged by these  data, encouraged at the  changes of fibrosis, at the clinical benefits and symptom responses, improvements in anemia platelets and hemoglobin.”

That second, larger study is critical to answer fundamental questions about PRM-151. Are these clinical improvements durable? Will changes in fibrosis restore normal hematopoietic function?  For example, Patient F has shown definite improvement in bone marrow fibrosis yet her MPN-Symptom Assessment Form score is trending up. Since anemia effects seem related to ruxolitinib only, will Promedior continue the combination regimen in Stage 2?

We asked Dr. Verstovsek what he thought of these results:  “I would characterize current results as a sign of biological activity of the therapy, with some patients exhibiting very modest clinical improvements in platelets, or anemia, or spleen, or symptoms. We don’t have major clinical responses. A couple of patients have some changes in bone marrow, as mentioned in abstract. Medication is very safe and therapy will continue past 6 months as possible. We need more time to assess possible impact of this medication on bone marrow fibrosis, and desired clinical benefit.”

It’s rare that we get to see and hear one of our own, a patient step out from the PowerPoint the charts and graphs of a clinical trial report and tell us her story. Here’s Voncille.  If you follow the rows of the chart, above,  you’ll find Patient F, second from the bottom. Reading across you can see she’s the PRM-151 Poster Girl not for any dramatic change in counts — they mostly held steady except her MPN-SAF score,  her total symptom score, is on an upward trend line.  She seems to have had a bone marrow response, reversal of fibrosis.  As Dr. Verstovsek cautions, all bone marrow data is provisional until the blinded review is completed.  What isn’t provisional is Voncille’s spirit and willingness to share her experience.

(After a long period of increasing fatigue) I was in a hem/onc office and after looking at my blood slides and counts he was very serious.

He sent me to do all the testing and I got a diagnoses of MF. He watched my counts for 6 months and finally decided to send me to MDACC for a transplant.

I was seen by Dr. V for a diagnosis. After we sat down and spoke about options and what I was there for,  Dr. V sent me  to the Transplant Dept. to see Dr. Popat.  At that time he was not able to answer my questions about transplants in MF patients because there was no data. This was breaking ground. So I wasn’t sure where I stood with my decision.  Here’s the wonderful part of this trip to Houston. I passed all the mandatory testing for a transplant, and was approved by Dr. Popat.  Then when it came to insurance, I have Medicare and they will not pay for a transplant for MF. and still won’t till this day. I was devastated. I couldn’t talk . I had to walk away. It was out of my hands.

I was always a fixer of everything in our family, but Mama was broken and there was nothing I could do about it. I got that part right away. So next day is another appointment with Dr. V and he gave me options and hope.

I did the Revlimid study with prednisone in 2007 for 6 months, then was removed because it was not helping me and the side effects were terrible cramping and diarrhea.

Second study was Pomalidomide in 2009.  In 3 months I had to have 2 blood transfusions. They stopped the study and went back to the FDA with a lower dose. Protocol was revised and I was called to start again.  f=For a very long time some of my counts were normal without blood transfusions. I chose to stay out of study, and would call when I felt I needed to see Dr. V.

Third study was BMS-911543 for 15 months. I began to need blood transfusions every month.  January I had 6 units of blood within 18 days. So we decided to stop the study.

By this time we are in October 2013. Dr. V told me about the PRM-151 study. I could see the excitement in his eyes, face and his actions. I said to myself, I’d hate myself if I don’t try this and it’s a success. So after our conversation I told him I was with him, lets do it.

PRM-151 is different than all the other drugs, in the fact that it’s not pills, but given through an IV or port, so you have to be at the clinic each month to receive the drug. You wait about 2 hours for a bed and it wears on you.  The days are long, the time on the road driving is long,  it’s all a huge pain in the butt, but knowing that I am finally having positive results after all these years is so exciting for me.  I’m going to hang in there as long as I can.

In the past I have had a chronic cough that lasted 2 years. Well about December 2013 it came back again. No matter what I do, or doctors nothing worked. So Dr. V had me see specialists there.  Friday they told me it was Gerds. About 5 months ago suddenly I was struck with shortness of breath.  Everything I did I was breathing hard. If I talked to much I was out of breath.  We have all been concerned but there were no answers.  I spoke to my cardiopulmonary doctor locally and he suggest we do a sleep study. Before we even got to order the machine my shortness of breath went away just like it came on…poof it was gone.

It’s been 2 weeks. We continued with the sleep study because there were some distrubing readings. Well I now sleep with a c-pap. I feel a little better difference, but we can use more improvement. My energy level was 0! It was so hard to do anything. At one point I wanted to stop the study because of all the stress of traveling. A brilliant man talked me out of giving up and here I am today still on PRM-151, on the mend from all these things that hit all at one time.  I still need a lot of sleep. But I hope one day I’ll be normal again, or close to normal.

About 6 weeks with no Jakafi hgb is now 10.5, usually it stayed in the 8’s and dropping. I think this is what helped my breathing to be honest.

It’s so easy to assume that the study drug is causing this or that. But with a great doctor in your corner to help you understand the ins and outs and one that genuinely cares about you makes you feel a little more in control and not falling apart because you don’t know what’s going on.

My thanks and gratitude to Dr. V, his team and to Promedior Company. I finally have hope!

Here is a video slide presentation of Dr. Verstovsek presenting his findings at ASCO from Prime Oncology. Thanks to MPNforum reporter/caregiver Rochelle Moore.

© MPNforum.com, 2014. Unauthorized use and/or duplication of this material without express and written permission is prohibited. Excerpts and links may be used, provided that full and clear credit is given to MPNforum.com with appropriate and specific direction to the original content.