There’s no stopping a committed myelofibrosis patient. Look what Julie & Co. did, again!...  Her HikeMF, 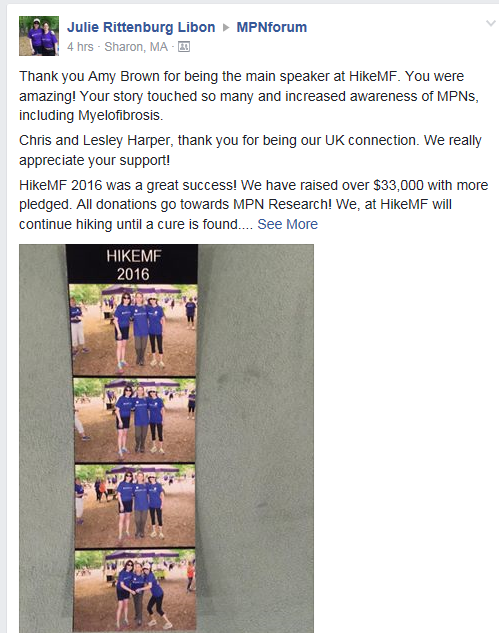 a sponsored walk up in the woods, put more than $25,000 in the MPN Research Foundation account last year.  She and her team, led by husband Bob and sister Lori, outdid themselves last week. They collected over $36,000 for MPNRF.  To put that in perspective, a typical Foundation research grant is a lab is $100,000 for a full year.  HikeMF alone pitched in a good chunk of that. …And HikeMF was joined by Paddles across the Atlantic as Chris and Leslie Harper kayaked in London, timed to start with the kickoff of HikeMF.

Here comes another World Health Organization revision to MPN classification, you ready for it?…This one incorporates new genetic sequencing data analysis and is aimed making diagnosis more specific and accurate.  When you have some time, have a peek.

FDA approves another immunotherapy drug for cancer.... These checkpoint inhibitors free up the patient’s own immune system attack cancer cells.  This time it’s Tecentriq for bladder cancer which marks Roche’s entry into the red hot immunotherapy niche in oncology….Merck’s Keytruda another immunotherapy drug, hit the headlines when it was successfully used to beat back Jimmy Carter’s melanoma.. And the smart money is on immunotherapy.  Sean Parker’s (Napster, Facebook) Parker Institute for Cancer Immunotherapy in San Francisco donated $250 million to six cancer center,  saying he’s he’s putting his money behind immunotherapy” because it’s at a turning point and would benefit from research without regard to cost.”… and a group including former New York mayor Michael Bloomberg donated $150 million  to Johns Hopkins medical school for immunotherapy research

Medical errors are the third leading cause of US deaths according to a retrospective study by a Johns Hopkins research group led by surgeon Martin Makary, MD.  As reported in the British Medical Journal The authors conclude more than 250,000 Americans die each year from medical errors.  That places death through medical error right behind heart disease and cancer but way ahead of death from respiratory disease.  The authors considered errors such as surgical complications and wrong dosages or types of medications., Here’s Martin Makary reviewing the research

Will Medicare pay for your stem cell transplant?  The answer is a firm probably.  The Centers for Medicare and Medicaid Services proposed coverage changes that would now include national coverage for myelofibrosis, sickle cell and multiple myeloma patients. The hitch is ths coverage would be availabale uner a process called “coverage with evidence development.”… 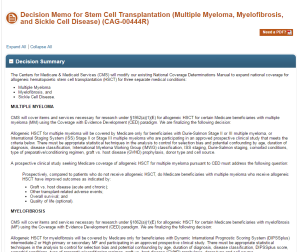 Medicare coverage for most services is determined by Medicare Administrative Contractors (MACs), working in 12 regions, all with their own local coverage determinations. Prior to this new coverage policy, according to an American Society of Hematology advocacy report, ” a myelofibrois transplant patient  could be liable for the entire SCT procedur and followup care if the local MAC found it not medically necessary. ” The proposed change would cover myelofibrosis, sickle cell and multiple meloma transplant costs under “coverage with evidence development.” That coverage requires those providing services to gather data for scientific evidence, using a data registry.  January 27, 2016 CMS published a decision memo authorizing national coverage under the evidence development guidelines.

Take me back to the contents