Story source: By James Gallagher Health editor, BBC News:
http://www.bbc.com/news/health-34731498
(Be sure to see the video for a direct personal look at the impact and reality of the procedure.)

The life cycle of stem cell moves from the near universal (totipotent) embryonic stem cell that can become virtually any cell in the human body, to the multipotent stem cell. The multipotent stem cell – for example the hematopoietic stem cell — can develop into several limited types of cells  such as red blood cells, white blood cells, platelets – or erythroid, myeloid, and megakaryocyte lineages. In this traditional view, in the next level of differentiation the multipotent cell may only develop into one of two types of cells (oligopotentcy). The last development state of the hematopoietic stem cell is unipotency, where it can only become a single type of blood cell. This is otherwise known as a precursor state. James Dick et al. advance the view that in adult humans there are only two progenitor classes, multipotent and unipotent, Both erythroid and megakaryocyte lineages derive from multipotent HSCs. “The work has implications both for understanding normal and disease states of human hematopoiesis.” 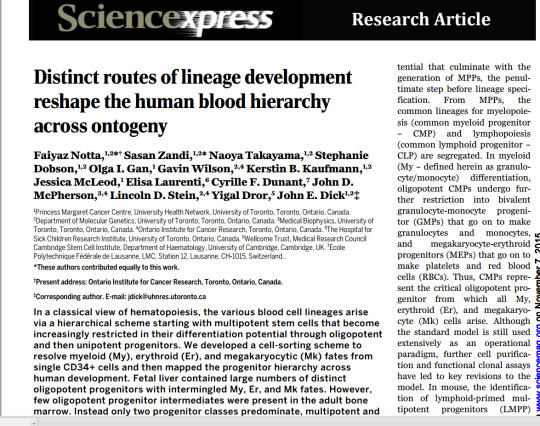 Here in Experimental Hematology is much-needed experimental data on  the comparative long-term effects of interferon alpha and hydroxyurea on human hematopoietic stem and progenitor cells (HSPCs). This study, by Josef Prchal et al.,  compared effects of pegylated IFNα (PEG-IFNα) versus hydroxyurea on HSPCs obtained from MPN patients before and during treatment.

PEG-IFNα treatment, but not hydroxyurea, promoted differentiation of hematopoietic progenitors without evidence of increased apoptosis or senescence.

Observation of increased apoptosis and senescence (cellular death and aging) within the Hydroxyurea population confirms the “wet blanket” effect HU has in lowering counts as well as its cytotoxicity. “These effects,” observe the authors, “occurred regardless of JAK2 mutational status. Together, these data provide the first in vivo evidence that pegylated INFa promotes cell division ane differentiation of human HSPCs.”

This one enters new territory for most of us but if you’re interested in how genes exert their impact on biological processes — and specially in how the new gene editing techniques can work hand in glove with small ribonucleic molecules (RNA) to disable and modify gene expression —  this is a good read.

In general, RNA interference molecules (RNAi), knock down the translation of genes by inducing rapid degradation of a gene target’s transcription.

To accomplish this, RNAi uses the cell’s own machinery. All of the components required for gene knockdown are within the cell, and the delivery of the RNAi starts the process. In the CRISPR gene-editing system, the guide RNA — derived from a system bacteria use to defend against virae — is teamed with  the Cas9 or other nuclease, to knock out the gene. Working together modified  RNAi and CRISPR/Cas systems can improve efficiency of targeting and validation.