The pain and suffering, loss of dignity and loss of hope, that sometimes accompanies advanced stages of acute MPNs is often pushed into the shadows.  It’s something we can see out of the corner of our eyes, but we really don’t want to know more about it than we have to.  There’s time enough to deal with all that.

Anthony Tiano made a powerful impression on MPNforum readers with his clear, matter of fact, presentation of his experience with MF and the effects of treatment. Professionally, he scrupulously documented the devastating path of his disease and the after-effects of treatment, without self pity or dramatization.

This was the work of a professional. Before his 15 year term in San Francisco as president and CEO of radio and TV’s public broadcasting giant KQED, Tony spent years in the broadcast industry.  When he left KQED he returned home to New Mexico, 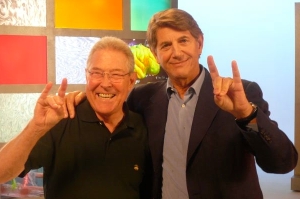 Tiano founded Santa Fe Productions in 1993 and produced hundreds of cultural and scientific programs for  public and commercial television.  So when he turned his eye on his own progressing disease, his eye for detail — the 12 gauge dialysis needle in his arm, the dramatic mid-range shot of his swollen spleen  — he presented his story meaningfully and clearly.

It was almost as if he were presenting us with a documentary picture of his reality, a way to repay the MPN community that had come to mean so much to him.

“If it weren’t for the MPN community to help guide us, we would have been lost,” said Kat, his wife of 39 years. “We considered every alternative. We considered stem cell transplant but his brothers weren’t a match and so we sort of went into a holding  pattern. After reading posts from patients, some of whom spent their last year or more of their lives in the hospital struggling with HVGD, we opted not to go that route. What was important to Tony was his remaining quality of life.”

“Through recommendations from doctors at UC San Francisco and Stanford, we found Dr. Tefferi who was fabulous,” said Kat.  “He was caring and compassionate.

” Tefferi worked with us to find the least disruptive treatment that would manage the symptoms and he did it beautifully. We travelled until this last year  For nine years  there was very little difference in his QOL with the exception of an occasional transfusion. That was huge 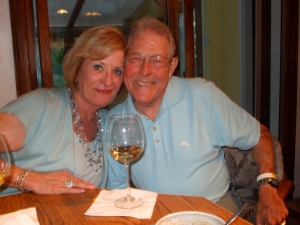 “Let me tell you a story about Tefferi ,” said Kat. “Tony had a mitral valve repair which the local doctors would not do because his platelets were so low they were afraid he would bleed out. We went up  to Mayo.  (“Rochester, Minnesota is not a place you want to be in February,” recalled Tony.) We had it done there. I remember being in the ICU. They were packing him with platelets, pack after pack. I knew because he had been taken off  his meds they were not going to stick so I e-mailed Tefferi at 2 or 3 in the morning. He got back to me in minutes saying he would have their On-call on top of it immediately.  They restarted his MF meds and his counts began to go up.”

The way Tony blocked out his story

He  first came into the Forum responding to a request for patient stories.  It was February, 2012.

“I’ve been a subscriber to the MPNlist for about 10 years now” he wrote, “having been Dx with MF in May, 2002.”  He told of his long supportive relationship with Dr. Tefferi and how his MF was kept at bay until 2011. You can read it here: “I’ll take what I have,”

Out of the blue he developed a problem with his mitral valve, a development he believed, with good cause, to be a result of his many transfusions. As a result of the dye used to highlight the valve during the repair – as his physicians had warned him – his kidneys failed.

He was on dialysis this past year, a five hour process, five days a week.

And his MF progressed, causing huge swelling of his spleen Here’s his summary:”

“From AMM to heart valve issues, to failed kidneys and now to a spleen that measures over 30cm, interferes with just about every meal, causes chronic diarrhea and has certainly changed my physical appearance.  I look Pregnant.  Not what I had assumed would happen to me in my golden years.”

His increasing  splenomegaly became his chief complaint, his barrier to a reasonable qualify of ife.  He felt he had no options. Radiation was ruled out. As was splenectomy.   As was Ruxolitinib based on his physician’s assessment of the likely impact on his already severe anemia and low platelets.

In the end, his thrombocytopenia was the immediate cause of his death.  On August 10,  his organs failing, he fell and scraped his arm. Tony simply bled to death.

In their announcement, , the family suggested that in lieu of flowers contributions in his memory be made to the MPN Research Foundation i

© MPNforum.com, 2012. Unauthorized use and/or duplication of this material without express and written permission is strictly prohibited. Excerpts and links may be used, provided that full and clear credit is given to MPNforum.com with appropriate and specific direction to the original content.