The Long and Winding – JAN 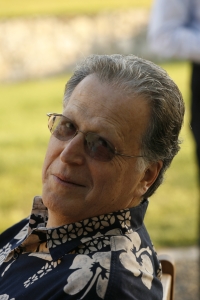 On July 20, 2000, we met Lloyd Damon, one of a team of myeloproliferative specialists and part of the bone marrow transplant team at the University of California at San Francisco (UCSF). Beforehand we reflected on the “good luck” send-off we’d been given by the doctor who, after months of testing, and eventually performing a bone marrow biopsy, had told my wife and me that I had a disease within the myeloproliferative disorder family. We did some web research and understood why he’d told us we least wanted me to have myelofibrosis, the one seemingly at the head of the food chain, and a rare (perhaps somewhere between 20,000 and 100,000 cases in the US) and deadly disease.

I called in advance to ask if it would be OK for us to tape the upcoming consultation, figuring we’d be in a daze for some of the discussion, likely wouldn’t understand some of the terminology, and might want to listen to it again under less strained circumstances. The doctor said that would be fine so we came with our mini-tape recorder.

Our initial meeting went on for more than an hour, so what follows is a highly truncated version.

Dr. Damon started by saying that although he still had a few tests to perform, “I have no doubt that you have myelofibrosis.”

This was not a good beginning.

“This is a really rare disease.”

“You’re tired all the time, right?”

“That’s because you have anemia, which will get worse.”

“Bone marrow produces red blood cells and related proteins. With yourdisease, your marrow will produce fewer and fewer red blood cells, because it’ll continue to fill with scar tissue. The lower those and other related blood counts, the less oxygen you’ll get to your organs and muscles and the more exhausted you’ll become.”

Karen asked, “Can  anything other than his marrow help to produce the cells?”      “Yes, his liver and spleen will kick in, but his spleen will act as a sink, because it won’t know how to get rid of the blood it will produce.”

I asked, “What’s the consequence?”

“Your spleen will grow larger and larger. Eventually, it can cause you great distress and press on other organs, which can cause a whole host of problems.”

“We’ll try drugs to reduce it. If they fail and it’s threatening to burst, or causing other problems, we’ll have to remove it. You can live without a spleen, but there are a number of reasons why we want to avoid that, if possible, one being that you can’t live without a liver and with a splenectomy, your liver then would be your primary backup.”

“Back to the anemia,” I asked, “what about blood transfusions?”

“They can help, but you can’t afford to become dependent on them.”

“Because over time, you’d gain iron, which will harm your liver, your heart, and possibly other organs.”

“Unfortunately, lots more. Blood clotting is typical, but paradoxically, so is a tendency to bleed. Blood clots, strokes, TIAs, and heart attacks are all manifestations of this disease. Often in the late stages, the white counts drop and you start getting infections that become increasingly difficult to control.”

“A stem cell transplant is a probable cure for many diseases. For myelofibrosis patients, it provides only a  40% possibility of a cure, and the median survival from diagnosis is five years. Not great, but remember, many patients are not diagnosed until they’re much older than you and, by that time, have complications from a number of other diseases.”

Not great? I was stunned, thinking, He just told me I’ll likely be dead in five years.

Karen took over as I was recovering from the doctor’s startling revelation.

She asked, “Why is a stem cell transplant only a possible cure?”

“Because our experience at UCSF is that few with your husband’s disease who’ve undergone a stem cell transplant have lived more than five years,  and a five-year survival is a general marker to establish the procedure as a probable cure. So, his disease is viewed as chronic and terminal.”

I stared at him. He’d just announced my death warrant a second time.

I sat there, drained, as the shock washed over me. Karen stepped in again. “Does it make a difference if a full sibling is a donor?”

“If she’s a match, the odds that he’ll survive the procedure improve.”

“If Harvey’s sister is a match, will she have to come to San Francisco for the transplant?”

Slowly emerging from my fog and needing to cut the tension of the calm but deadly news we were hearing if even just for a moment, I asked,

“Why, don’t you have tubes that long?”

Unfazed by my feeble attempt at gallows humor, the doctor explained the high mortality just surviving these transplants (reduced somewhat by matching sibling donors) and the agony often suffered by patients because of deadly infections from graft-versus-host disease. He also told us that UCSF’s protocol prevented him from performing a stem cell transplant on anyone older than fifty six. That gave me only a half year to have the transplant if I was going to proceed.

We felt like a Mack truck had clobbered us. As we sat there, dazed and attempting to be stoic, the doctor said, “Look, you have a life-threatening disease. It’s insidious, in part, because it follows no specific pattern. It affects different people in different ways, so we never know exactly how it will attack you, but at least it tends to move slowly, so you’ll never fall offa cliff . Still, what’s clear is that it’ll limit your life expectancy.”

That was just to cheer us up from all the bad stuff we’d heard. Because of all of his upbeat information that day, Karen and I dubbed him Dr.Demon.

We went to Stanford for a second and third opinion. The two doctors we saw confirmed the diagnosis, but modified the prognosis from five years to between three to five years. Was there no good news? Yes! One of the doctors told me, “Except for the fact that you’re dying, you’re actually fairly healthy.” That certainly made me feel better. At least I’d be a comparatively salubrious corpse.

All of us, of course, live under a death threat. Still, it makes a difference when doctors tell you they can see the end of your life and that it won’t be pretty. Ultimately, however, I

realized that I had a choice. I could choose Door Number One and hide in a cave with a neon sign at the entrance flashing “Pity Me” and retreat deeper and deeper into the darkness, or Icould choose Door Number Two and allow my senses, never so focusedas by the verdict of a terminal disease, to shout that I now had a reason like never before to be thankful for every day that I could see, smell, hear, taste and touch. I chose Door Number Two. You never really smell a rose until you’ve been told you’ll likely die within the foreseeable future. So Ibegan to marvel at the gift of life, which up till then, I admit, I’d taken for granted.

Some believe that with serious diseases come blessings. Count me as one of the believers.

Still, my journey had just begun. Ahead lay many twists and turns on the long and winding road.
Take me back to the Contents