Interferon, particularly for us with blood cancer, is a well-established therapeutic option.  With the exception of very few eminent hold-outs, interferon is universally accepted for use in early stage MPNs.

But not so long ago, the very existence of interferon was in doubt.  In 1956, scientists knew that viruses — even viruses killed with heat — could produce resistance to viral infection in a cell. It was the finding at the heart of every vaccination. What we didn’t know was why.  Unraveling the answer would eventually uncover unimagined powers within the human cell. It would be a long and tortured path that would end in tragedy for the chief actor.

The year is 1881, the March day is sunny with snow still hard-packed on the streets of Moscow. As the popular Russian Czar, Alexander II, rides by in his carriage, an explosion from a tossed terrorist bomb kills a Cossack guard and wounds bystanders. Unhurt, thanks to bullet proof armor — a gift from Napolean III — Alexander II emerges from his carriage to survey the damage.

Another bomb explodes at his feet and within hours he is dead.

A witness to the carnage is the Czar’s son, Alexander III, whose first official act is to tear up the reforms drafted by his father. In the ensuing unsettled times, anti-Semitic groups spread the rumor that Jews were behind the assassination,  triggering a series of brutal pogroms that would start in Ukraine and rip through the Russian Empire like a wild grass fire across the steppes. 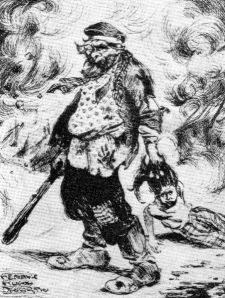 The violence culminated in the May Laws, with many restrictions against Jews, including severe limitations on education, work  and residency.

In the small Lithuanian town of Siva, near the Western borders of the Russian Empire, an impoverished Jewish peasant, Barnet Galinsky, survives by buying and selling small items. The May Laws condemn him to starvation. As the violence in neighboring villages increases, Galinsky flees to England.

Unable to speak English, he tells immigration officials he is Barnet the son of Isaac. His papers are stamped and it is as Barnet Isaacs that he begins life in Leeds as a tailor’s assistant, eventually marrying and moving to Glasgow, continuing his trade as a peddler of cheap goods. His son, Louis, brings this trade to a thriving business in Scotland.

The very same interferon we now rely on to hold our MPN at bay, reduce symptoms, induce hematologic remission and affect molecular response is  a production version of the interferon Isaacs discovered we make in our own cells. This low molecular weight protein, a product of  gene expression in the nucleus of our cells, is a formidable ally.

Interferon is the foot soldier of our immune system,  the “interfering particle” recruited by the appearance of an enemy pathogen.  Interferon is a protein capable of incapacitating an enemy virus as well as warning neighboring cells to arm themselves against infection, commanding a Masada-like mass suicide of cells or calling in a predator strike from more powerful, special forces in the immune system.

And yet, little more than a half century ago this small powerhouse was thought not to exist as an entity at all. The interfering effect was simply a process, something that happened when a virus left a bit of its shell behind.  In reality it would turn out to be something produced in the heart of the cell nucleus and pumped out into the cellular war zone of infection armed to the teeth with weapons and communications gear.

Using stone age techniques, crude even by the standards of that pre-digital world,  Alick Isaacs along with his associates,  Jean Lindenmann, a Swiss virologist and  UK chemist and Yale post-doc D.C. Burke — and, early on., electron microscopist specialist Robin Valentine —  worked in the Flu Vaccine section of the National Institute for Medical Research in London.

In the summer of 1956, Isaacs and Lindenmann knew that influenza virus particles inactivated by heat and attached to red blood cells would interfere with live influenza cells attacking chick embryos.  Here was Alicks Isaac’s critical question:  If one side of a flu virus particle is attached to the red blood cell only the opposite side could interfere infecting the host cell.  What was the process?  Did the inactivated virus particle transfer material to the host cell…or was interference generated within the cell?

In a time of limited grasp of molecular pathways,  the decidedly low tech lab of Dr. Alick Isaacs, room 215 of the National

Institute of Medical Research in the Mill Hill section of London was the scene of a Keystone Kops search for an interfering particle that might not even exist. Along with his associate,  Isaacs’ injected fertile hen’s eggs with killed virus and deconstructed the result — weighing, heating, sloshing around beakers with ether, freezing, diluting, concentrating in search for a particle that might account for the interfering reaction flakes of virus would create in a cell.

It was how science was basically done in this largely pre-digital world where the double helix was just theorized, genetic sequencing was still two decades in the future  and computers were giant machines with tape decks and vacuum tubes.

Most scientists — including Isaacs and Lindenmann — believed some portion of the virus lodged in the outer walls of the cell tissue created this immunity or interference. Others believed a prior virus simply interrupted the reproduction process within the cell or consumed the available biological material.

Isaacs began to believe interference came from the within the cell itself,  from a particle — called interferon by Lindenmann — produced in the nucleus of the cell.

The classic experiment to prove the interfering substance was produced with the host cell to repel viral attack was deceptively simple.  It’s a recipe one could almost follow in one’s own kitchen if a supply of Intron-A or Pegasys is urgently needed and a handy virus, both live and inactivated, available.

Recipe for a Natural MPN Remedy

A drum washer, could be turned by hand.

Remove the chorioallantoic membrane from the the egg.

This  membrane – very similar to the human placenta –  separates the fetal chick’s inner environment from the outer world.  It’s inner and outer structure make it ideal to separate effects from outside the cell from responses within the cell.

After two hours, remove membrane, wash clean of virus and

Place in fresh fluid in Tumbler #2.

Remove after several hours and place in a bath in Tumbler #3.

(They will exhibit resistance, demonstrating something already known:  Tissue exposed to virus is resistant to infection.)

Now for the punch line. The action that made this experiment a classic in the history of biology.

Place a fresh set of membranes in Tumbler #2 and introduce live influenza virus.

If these membranes – which had never been in direct contact with virus, showed signs of interference the case could be made for cellular production of “some inhibitory substance.”  That is, something inside the cell itself was resisting infection.  Significant interference was registered.

“In an effort to explain the results of the last experiment the possibility was considered that fresh interfering activity was produced by the membrane….To distinguish (this interfering agent) from the heated influenza virus we have called the newly released interfering agent ‘interferon.’ “— From Virus Interference. I. The Interferon by A. Isaacs and J. Lindenmann, 1957, Proceedings of the Royal Society of London

Because the methodology was so crude and the possibility of error great, this elegant, simple proof at first was greeted with scorn in scientific circles.  Some American virologists ridiculed the findings published in The British Journal of Pathology   –calling interferon  the “misinterpreton. ”  After publication of a second paper and sharing the results of what might be a “penicillin for viruses”  at professional meetings, Isaacs himself began to have doubts, wondering if some residue of virus might have contaminated the experiment. He grew depressed, suffered a “nervous breakdown” and was briefly institutionalized.

This period of doubt was followed, shortly afterward, with extravagant hopes worldwide and claims for the new silver bullet as the Isaacs-Lindenmann experiment was replicated.  Many considered it the penicillin for viruses and hopes for its miraculous future were expressed in popular media like the Flash Gordon comic strip.

Once its existence was established, purifying interferon and ramping up production was no easy matter in the pre-digital age and would take years, patent battles, and huge investment to finally succeed.

Isaacs suffered a subarachnoid hemorrhage that that hampered his productivity but didn’t prevent him from continuing his work as director of the World Influenza Center and contributing ideas and encouragement to the scientific team at Mills Hill.  He was elected to the Royal Society of Fellows in 1965. A second hemorrhage ended his life a year later. He was 45 years old.

Alick Isaacs would not live

to see his discovery become the wonder drug saving millions of human lives and offering blood cancer patients hope for remission and survival.

The work of a young doctor, an associate professor at Cornell Medical School, would soon help bring that day forward for MPN patients.

Comments on: "The Interferon Papers – Part I (DIscovering interferon)" (2)