HU vs. INF. Round One, Title fight.

While all around the teeming halls of the San Diego Convention Center hematologists headed for presentations, meetings and poster exhibits, all MPN eyes were focused on a titanic face-off:  Hydroxyurea versus interferon.

In the smack down battle of the 21st Century for the hearts and marrow of the MPN community, an old, battle-scarred and much criticized veteran squared off against a sleek, younger and heavily favored rival.

The result was as surprising as the outcome of the recent American Presidential election…and almost as controversial.

On every judge’s scorecard hydroxyurea (HU) outscored, outpunched or fought interferon (INF) to a draw  as it convincingly drove its rival into the ropes in this opening round of a championship fight.

Although known for its speed, few anticipated the old warhorse would make such a convincing showing as it mounted an overpowering attack on polycythemia vera, essential thrombocythemia and myelofibrosis.

The battle is far from over. Interferon, known for its slower-acting, more inclusive therapeutic effects against MPNs is expected to overtake hydroxyurea  in the second round, the results of which will be reported in the summer of 2017.  But HU surprised in this first round by demonstrating its ability to reduce the JAK2 burden of MPNs and to produce a better reduction in enlarged spleen than INF.

For the past year, the two contenders were matched in an international arena, the results monitored in two different studies in dozens of countries. The older, bigger study was the MPD Research Consortium’s  MPD-RC 112 Phase III trial comparing hydroxyura to Pegasys (NCT01259856). Smaller but more anticipated was the closely watched European study mounted by the union of a Taiwanese company, PharmaEssentia, and Europe’s  AOP Orphan Pharmaceuticals.  The PROUD-PV trial NCT01949805  was a Phase III study to compare the efficacy and safety of the novel monopegylated interferon alpha 2b AOP2014 versus Hydroxyurea over the period of one year.  Word from Europe was this drug, also called ropeginterferon and, simply, P-1101,  requiring dosage only every two weeks (and at that with a nifty pen-like device) could be the heir apparent to Pegasys.

For MPN patients, finding a fresh source of pegylated interferon was becoming urgent. For weeks, following a short distribution breakdown this summer, MPN social media was buzzing with rumors that Genetech/Roche was planning to stop production of Pegasys.  Ever since Gilead released its $100,000 miracle hepatitis C drug, Sovaldi,  a major share of the market for Roche’s Pegasys suddenly weakened. Would Genentech  drop Pegasys altogether? After checking with home base in Basel Switzerland, a Genentech corporate spokesperson told MPNforum its parent company “Roche has no plans to stop PEGASYS production in the near future.” That may not be not the warm and fuzzy reassurance MPN Pegasys patients and their docs might want to hear, but it’s something. Meanwhile a lot of hope is riding on the ability of ropegintron (P-1101) to quickly negotiate the approval process of European Medicines and the FDA.

the Final Results from PROUD-PV  (Abstract 475) at ASH.

In prior  trials in PV patients presented at ASH during the 2012-2014 period, P-1101 chalked up an impressive record. Overall clinical response, reduction of blood cell lines,  was about 90% with 45-50% of patients showing complete response,  after 6 to 12 months and patients remaining “largely independent of phlebotomies.”

Gisslinger’s 2016 report at ASH/San Diego was more subdued  The Phase 3 study was spread across 48 sites in 13 European countries. AOP Orphan holds the license from PharmaEssentia, developer of P-1101, for Europe, Africa and much of the world outside of the United States.  . The primary endpoint of the PROUD-PV study was to compare disease response rates after 12 months along such specific parameters as hematocrit<45% without phlebotomy, platelets <400, leukocytes <10 and normal spleen size.  Secondary endpoints included reduction of JAK2 allelic burden.

Inexplicably no data was  released on those results.   Instead, via press release and Professor Gisslinger’s presenation and comments, AOP Orphan offered a summary of sometimes apologetic results.  For example, although HU demonstrated better overall hematologic response in the comparative trial (45.6% vs. 43.1% for ropeginterferon P-1101,  the difference was “statistically insignificant.” And as to the failure of INF to indicate greater reduction of enlarged spleens than HU, (21.3% reduction for r0peginterferon versus 27.6 % for HU) that was because participating PV patients had near normal spleens to begin with so the results “were not clinically relevant.”

Based solely on the ropeginterferon highly preliminary summary report, in this first round, P-1101 appears to be not quite as effective overall as HU but statistically not inferior.

P-1101 might have suffered a setback in this first round confrontation, but all AOP Orphan wanted to prove in its 12 month PROUD-PV trial was its drug was “not inferior “ to HU. It might seem to be the lowest common denominator of proof but it could be a low enough bar to secure approval in a space that badly needs a new med, specially one thought to have a better toxicity and long-term palliation profile. The continuation trial of those in the one year AOP Orphan group might provide the clinching data needed to get P-1101 on our pharmacy shelves by the end of 2017.

It was left to John Mascarenhas (Mt. Sinai Medical ) and the detailed MPD-RC report to deliver a more definitive assessment of first round results. 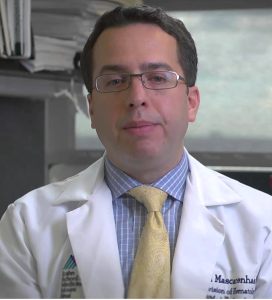 The two trials, the European ropeginterferon trial and the MPD-RC 112 trial report  (Abstract 4271: Impact on MPN Symptoms and Quality of Life of Front Line Pegylated Interferon Alpha-2a Vs. Hydroxyurea in High Risk Polycythemia Vera and Essential Thrombocythemia,   (NCT 012589856) have much in  common.

They both compared pegylated interferon with hydroxyurea  They both reported preliminary results based on a 12 month trial.

There are differences. PROUD-PV tested a relatively new formulation of interferon for efficacy in PV therapy as measured by time between phlebotomies, hematologic response and spleen reduction and reported few details.

The MPD-RC trial measured the impact of Pegasys and HU on symptoms of high risk PV and ET on Quality of Life, symptomatic relief as well hematologic and molecular responses as measured by the MPN Symptom Assessment Form, the TSS and and bone marrow biopsy and molecular response derived  by measurement of changes in JAK2 burden.

MPD-RC as well as AOP stressed their reports were preliminary and will be followed by a report on longer-term impacts of the two drugs in the summer, 2017.

However, the short term results raised eyebrows as data revealed the blockbuster finding that HU did indeed reduce the JAK2 allele burden in MPN patients.

MORE ON MASCARENHAS REPORT INCUDE SLIDES ON THE PAGE

Dr. John Mascarenhas on the significance of the preliminary MPD-RC 112 phaseIII trial comparing HU to PEG.

‘This was a preplanned analysis to determine either a clear signal of efficacy or futility in either arm. At 12 months there was no difference in the primary outcome measure of complete response ,….Meaning that at 1 year the two drugs are equivalent in inducing normalization of counts, resolution of palpable splenomegaly and symptom burden.   There was really no difference in molecular response rates.

“In terms of patients reading this, it is imperative they do not jump to conclusions about the superiority of one agent over the other based on this interim analysis….But I would say that those on HU can at least take solace in the fact that the drug has shown activity that is often not considered possible with this agent.”

A (very) brief history of hydroxyurea

The success of hydroxyurea should not come as a surprise. Even though it lies at the bottom of our medicine chest like an expired bottle of aspirin, it has a long and venerable scientific lineage.  HU, also known as hydroxycarbamide, decreases the production of single units of DNA – deoxyribonucleotides – by inhibiting an enzyme (ribonucleotide reductase)  necessary for the formation of  DNA .

Naturally occurring in small amounts, HU was first synthesized in 1869. Nearly 100 years ago animal testing of HU began on solid tumors, sarcoma, etc.  Clinical trial “demonstrated that the drug was a highly effective cytostatic agent in chronic myeloproliferative disorders rather than in solid tumors. ” It has been the standard of care and first line of MPN defense ever since.  (Robert Latagliata,et. al.Cancer 2012)

Here at the Asia Pacific MPN conference earlier this year, Dr. Gisslinger talks about the risk/benefit of drugs used to treat ET and PV, phenotypes that might have normal longevity and the increased danger of DNA damage from different treatment modalities.