Expanding horizons in the MPN World….

The Expanding Horizon series, from time to time, will feature some of the new web sites, Facebook pages,  and event-based enterprises now serving serve our  MPN community.  MPN patients, caregivers and their physicians have been an active, vocal and supportive community out of all proportion to our numbers. The creation of new resources by patients and caregivers is a tribute to that tradition of energy, creativity and compassion put to the common good.  We need to recognize and support their work.

PV Reporter is one of the newest enterprises. Its creator, David Wallace, a web designer and search engine optimizer, first surfaced a couple of years ago in e-mails complaining about design and organization of MPNforum Magazine and volunteering his assistance. He then emerged as a real person, one of the leading hosts of the Carolina MPN Patient Support Group.  His photo, with full SCUBA gear (pre-PV), appeared in our featured article Marijuana Papers a piece he researched and wrote.

It only takes a quick visit to his new site, PV Reporter  to see what he’s up to.  The first thing that’s apparent is his skills as a web designer and SEO have been put to use. (Try googling PV Reporter.)  To give his primary audience — us — easier access he produced a YouTube video and started a Facebook page    And as if all that weren’t enough David created a special MPN search engine with an algorithm designed to cut through the clutter and get us the good stuff we’re really looking for.  A good indication of what David is up can be found in his resource listing of on-line destinations we need to know about.

The  PV portion of his PV Reporter title is based on his own MPN flavor (since 2009), but in fact PV Reporter is a utility for all the MPNs. (He checked, but MPNforum was already taken.)  And PV Reporter stays on top of events reporting breaking news and videos like this new production from the MPN Research Foundation.  Bookmark the site, visit often and let David know what you think. 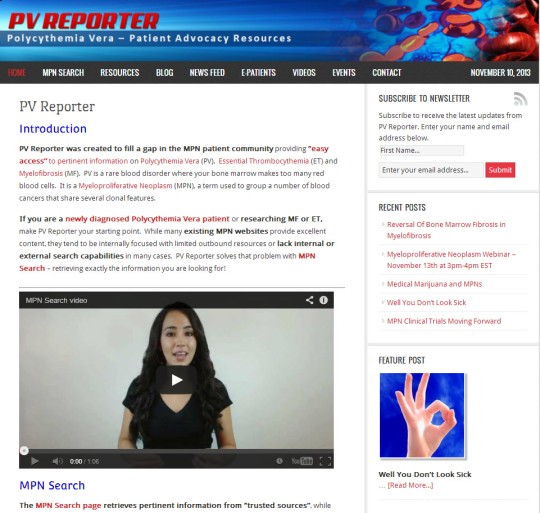 Why did you start PV Reporter?

I was a supporter and follower of MPNforum from its infancy.

I was impressed by the methodically detailed research articles, knowledge imparted to its readers and its “blazing new frontiers” in the MPN world. My only beef with the site; was difficult navigation and a less than desirable search capability. The author was pretty cool though, so I stuck around and continued to look at what I would do if I had my own site.

After leaving behind the “high pressure quotas” and demanding travel schedules of the corporate world of software sales, I decided to pursue a goal and learn web design. As my skills improved over the next 2 years, I figured I could “build a better mousetrap” that would provide easy access to pertinent information on all MPNs and a “custom search engine” that would benefit the entire MPN patient community….thus PV Reporter was born.

The site has drawn very solid traffic and is pulling in new eyeballs from around the world. I was actually surprised how quickly new readers jumped on board, knowing there was a very loyal following on MPNforum. But I figured going in, the fast growing MPN patient population could easily support another publication with a slightly different focus. They signed up for the newsletter (http://www.pvreporter.com/ – top right hand corner of the page), poured through pages of numerous resources and returned for research and perusing the freshly pressed articles.

Unexpectedly, I felt compelled to continue producing new content (articles) as I noticed I was beginning to gather a bit of a following. My writing style tends to be less technical and easier to digest than other websites I followed, so apparently that is working. I don’t mind pushing the envelope, writing about subject matter some folks might find objectionable (i.e. – medical marijuana), while also uncovering my personal PV experiences.

Does anyone really want to read a first-hand experience on a bone marrow biopsy, with a side dish of some yummy pictures of my bone marrow?….well I guess we will see about that one. On the other hand, I am working on a ground breaking article that may expose an“undiscovered” fear that lurks from within many PV patients…..stay tuned for that one.

How did you go from a  List Lurker to Publisher

I must admit for the first 3 years or so I was a total “list lurker.” Basically that means I was reading posts, articles and suggestions on Facebook without giving input or comments. I asked myself why and determined….what the heck do I know about in depth details on Polycythemia Vera? I am learning from “seasoned veterans”, many who have lived with MPNs for 15-20 years and several who have helped me personally along the way. So at the time, I did not feel comfortable posting or commenting. For those of you who are list lurkers….no worries, it’s all good, settle in and post when you are comfortable. There are many helpful support groups out there (bottom of the Resources page). Please utilize and don’t be afraid to ask questions, there are many friendly, knowledgeable folks aboard to help out.

has been quite a leap. After 4 1/2 years as a PV patient navigating complex medical issues, insurance company hassles and doctors who rarely agree on a course of treatment, I have learned quite a bit. One of my goals is to publish articles and information in an easy to digest format that will help us all and be readily found by Google and Yahoo to assist new and existing patients.

Do you have any specific initiatives moving forward?

Yes, uncovering the Mounds of Hidden Data and Discussions in Facebook Group Forums. Since I started PV Reporter, I joined 8 or 9 different MPN related Facebook groups to become more active in the community, while also alerting Facebook members to check out freshly published articles –

Along the way I made a few key Facebook discoveries:  Discussions (threads) with valuable information are lost in a long chain of daily posts that go on for numerous pages and are not searchable, There is a huge need to uncover “lost/hidden posts” by publishing summaries on PV Reporter, making them instantly accessible and searchable

So I am getting that message out there and have several dynamic, bright individuals that I am thrilled to be collaborating with to accomplish this goal. I see opportunities ahead to open the doors and pull up the shades and let the sunshine in on all MPN patients.

Do you have a particular audience you are targeting?

Trends are emerging and some things are easier to quantify than others, but I see PV Reporter drawing a younger, hipper audience (think Rolling Stone vs. Newsweek) and in the process pulling in quite a few recently diagnosed patients as well. Many of the newly diagnosed are scared and hungry for answers to complex questions. The very thought of being an “empowered patient” resonates clearly for those of us who have had an MPN for a few years. For newbies it is a long, slow learning process and a bumpy road navigating our complex medical system that sometimes looks like a bad political debate.

Comments on: "Expanding horizons in the MPN World…." (2)