The year’s most important MPN event

As you read this, they’re packing their bags and heading for airports in Europe and across the United States. Destination:  A non-descript office in the American Midwest. Ahead of them:  A long day. No speeches, no workshops, no media, no hype. Just grunt review  of scientific options to cure MPNs.

It’s the most important MPN event of the year. And, in the end,  lots of money will change hands.

Tomorrow and the next day this blue ribbon review panel will guide the course of MPN research.It’s the annual grant review meeting of the MPN Research Foundation, the process that has contributed to virtually every important scientific and therapeutic advance affecting MPNs for the past decade.

The last time MPNforum explored the Foundation’s impact on MPN therapy in “Behind the Lab Door”   we stumbled on the grant that would solve a great MPN mystery and open new treatment options.   The Foundation made two $150,000 basic science grants to researcher Robert Kralovics working in Vienna. The next year, Kralovics, along with Professor Tony Green working independently, stunned the assembled hematologists at ASH by announcing discovery of the CAL-R mutation, a driving MPN mutation for nearly half of all MPN patients.

That’s become par for the course for this Chicago team, 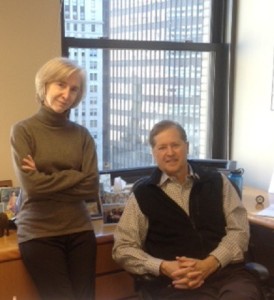 What’s the secret?  How can this small group succeed in finding and funding so many crucial MPN scientific advances?  The Foundation’s focus is narrow and its working style collaborative. The Leukemia and Lymphoma Society, for example,  was brought in as working partners when the MPNRF initiated the MF Challenge program.  And then there’s the insane passion of the  leadership, Rosen — himself a PV patient —  and Van Husen. to work for a cure.  Before time runs out.

To get a true picture of what it takes to discover transformative MPN research and arrive at a decision to fund work that will actually end up in our medicine cabinets, we went to the one person who probably has the best ground-floor perspective.  Michelle Woerhle is the Deputy Director and majordomo of the MPN Research Foundation.

Forum:  So Michelle.  How would you describe the atmosphere as you all get ready for the 2015 Grant Review Process?

Michelle:  It’s not as glamorous as you might think. 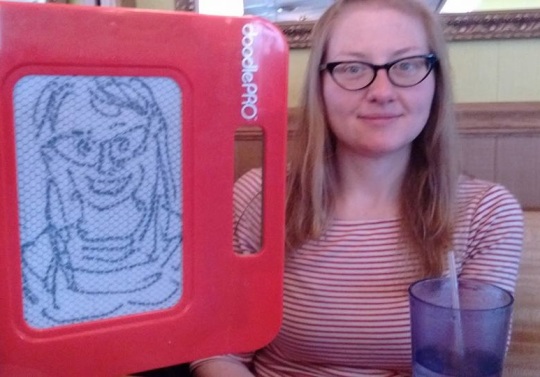 Right now it’s all about  room set‐up, menu picking and copying. It’s making sure we have a nice private room for dinner so  reviewers and board members can meet each other or reunite. We start dinner early and get them to bed on time so that they are bright eyed and bushy tailed for breakfast at 8.

The grant review room is a conference table or sometimes a U shape formation of tables for the reviewers. There’s also a “peanut gallery” which includes any board members who can make it in (These are patients and representatives from LLS.)

Forum:  What’s the purpose of the “peanut” gallery?

Michelle: The peanut gallery isn’t supposed to weigh in, but at times it is necessary for clarification of either the priority of the funding cycle or the comments by reviewer. What’s happening around the conference table has a few elements.   The reviewers are judging science, but they’re also talking through each project’s relevance to MPNs, risk, feasibility.  The key to what we do lies in it not being something that a group with deeper pockets would do anyway. We are closing loops and filling in gaps of understanding that will one day lead to better treatment options and dare we say a cure for all.

Forum: Where did these proposals come from?

Michelle:   It starts with the Roundtable meeting in the Fall, when a panel of researchers, hematologists, specialists in other areas like fibrosis and molecular biology, plus Board members get together to review the MPN therapeutic landscape. What needs to be done? What are the main areas we should be funding.

The composition of that Roundtable varies except for Dr. Andrew Schafer (Weill-Cornell) who chairs the meeting and John Crispino (Northwestern), the Foundation’s Scientific Advisor.

We start with a comment from Chairman Bob Rosen who reminds the room that they have a unique opportunity to debate life‐saving science in a room with people whose lives are waiting to be saved.

Out of that Roundtable comes the Request for Proposal (RFP)  The RFP is written by Barbara following the Roundtable. Once the RFP is done we send an email to every researcher, clinician, nurse in our database. It shouldn’t surprise you that  we have built up our list of contacts interested in the RFP over the years of networking with the MPN research community, issuing press releases and attending ASH. Often we have to branch out into uncharted waters, making contacts with new disciplines. This year, for example,  one of our focus areas included immunotherapy and gene editing technologies such as CRISPR/Cas9.

Forum:   I can imagine with Federal funding drying up there must be an enormous response to the RFP. How do you all handle that?

Michelle:  That can be a crunch. Because we only have one day with reviewers, we need to use their time wisely.

With well over 50 grant applications normally received annually,  the Foundation triage and review system, honed over the past 10 years, relies on full and democratic participation. During triage a core of advisors evaluates all proposals and then discusses which proposal makes it to review. One person, one vote.  Discussion, re-vote. If anyone has an interest in the outcome, the party is recused. Count the votes, and the decision is final.

Andy Schafer,  head of the MPNRF Scientific Advisory Board. parcels out the proposals that make the final cut to teams of two reviewers each, to score each proposal individually.

Funding decisions are based on that process.  That’s the setting for the review meeting about to convene.  During the review meeting discussions can be passionate and lively. Although scores are often close, they don’t always agree and there are intense discussions around the ultimate value and feasibility of the proposed research.

Forum:  How do reviewers arrive at a consensus on funding?

Michelle: There’s  incredible collaboration and open-mindedness in this process.    Because reviewers approach matters from different perspectives, the discussion broadens understanding of the proposed science and the feasibility of success.  Everyone is aware of the high stakes involved.

Forum: Thank you. And good luck.

Full disclosure:  While the facts here are accurate, the author is hardly objective.  I love these people. I believe at least three of them should be sanctified. They work hard, they’re smart and funny, open-hearted compassionate  and deeply involved in the MPN community.  We’re incredibly lucky to have them working for us.  They are funding the MPN Genetics Network and supporting MPNforum’s efforts to bring gene editing safely and quickly to MPN therapeutic application.  They also took me out to dinner three times, once was lousy but the other two times were really fun.