After ASH: Drugs and Genetics.

That day has finally arrived. While solid progress in MPN drug development was reported at ASH, across the country a  new era of MPN treatment entered the history books. A group at Johns Hopkins successfully used CRISPR Cas9 to target and edit MPN-patient JAK2 mutated stem cells.

Overall 2014 was a time of consolidation for MPN drug development — small gains, restarts of stalled trials, preliminary findings of possible future benefit, and combination trials (almost always with ruxolitinib).   But it was a time of revolutionary change in genetic engineering that is applying this development work to an MPN cure.

Away from the MPN pavilion and across the San Francisco Bay in Berkeley, a transformational discovery reported two years earlier had changed the game forever.  Rapid, precise, and cost-effective editing of mutant genes is now possible.  Instead of dealing with downstream effects of MPNs, we now have the tools to halt the disease at its stem cell source!

The MPN world is at an historic crossroad.  We’re between two worlds, a flooding mass of MPN drug research and an on-rushing genetic engineering technology. The joining of these worlds opens a new era of therapeutic possibility.

We are standing right at the brink, in clear sight of genetic cure for MPNs.

We have a perfect candidate, the mutated JAK v617f  gene that affects nearly half of us and almost all of us with PV. Between that target and the CALR mutations, with no further research we can present target genes to be edited. We needed drug development work to identify mutations and we will need effective drugs to manage our MPNs as gene editing works its way through the regulatory process.

But there is no longer any doubt.  We are speeding into a future that offers precise, permanent correction to deadly MPN mutations.  In other words, a cure.

But when all is said and done, one naked, unquestionable fact remains.

Ours is a clonal disease cloaked in mystery.  For all the drug development work, treasure and brilliance poured into understanding myeloproliferative neoplasm, the fundamental mechanisms remain hidden so far.   Why do MPNs arise, how do they actually work,  what are the interrrelationships among some of the key mutations, enzymes and pathways?  Adding to the frustration of clinicians and scientists alike, none of the big three driver mutations so far identified — JAK2, CALR and MPL–are even present in some MPN patients.

What we do know is the blood producing stem cell carries the answer.  We have seen how substituting healthy donor cells for mutated MPN hematopoietic stem cells can eradicate MPN disease. We all have friends who have gone through stem cell transplant and are now free of MPNs. The stem cell is the target..

Rapid advances in immunotherapy, like CAR-T reported at ASH, are likely to help our physicians mobilize our immune systems better to defend against downstream effects. 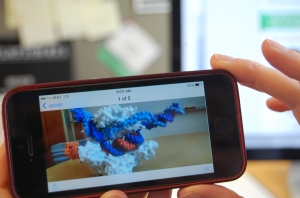 But beyond stem cell transplant there’s now the prospect of attacking MPN mutations at their stem cell heart through gene editing: We can target and remove the mutation and replace it with healthy code. With over 96% of PV patients carrying the JAK2 V617F mutation, that might be a good starting point for MPN gene editing.

Not only can it be done, with CRISPR Cas9 it has already been done in animal and human cells.  Beyond the Johns Hopkins achievement that kicked off this story, we have previously reported on MIT researchers curing adult mice of a rare mutational liver disorder by injecting CRISPR Cas9 into their tails. As reported in the New York Times,  Harvard Medical School genetics professor George Church said: “I don’t know any species of plant or animal where it has been tried and it failed.”

“I don’t know any species of plant or animal where it has been tried and it failed.”
–  Dr. George Church, Professor of Genetics, Harvard Medical School

A therapeutic partnership — the new alliance

Scientific and clinical studies in MPN drug development are the essential underpinning for a CRISPR Cas9 MPN navigational system. Discovery of the mutations and pathways that make up the MPN landscape are the necessary preconditions to create RNA targeting for gene editing. Biochemistry, molecular biology and genetics have teamed to develop tools to use those hard won findings to create the CRISPR /Cas9 the gene editing molecule that can search and destroy the mutant clones.

For us, this alliance of fundamental MPN research and genetic technology that produced the CRISPR battleship armed with clone-cutting Cas9 enzymes came together in San Francisco at ASH, December 8, 2014.

The hidden, seemingly invulnerable and flawed MPN hematopoietic stem cell (HSC) is finally under direct attack on two different fronts — through the massive bombardment of stem cell transplant and, now, the surgical strike of gene editing.

For a Snapshot  on the CRISPR Cas9 story, go HERE, to the Berkeley office of Professor Jennifer Doudna.

MPNforum is in the ASH summary video business  as well. Sorta.  Our trademark videos are just a gritty hand-held extension of our interviews. No lighting, no sound technology, crude editing and great guests.  To hear Dr. Claire Harrison conversationally illuminate  ASH in light of impacts on patients — some drug effects, Pacritinib, stem cell transplant and clinical trial —  is to be treated to an adult conversation with a compassionate, deeply experienced clinician who truly knows her stuff.  Here, get yourself a cup of coffee, settle down and  see for yourself:

One of the secrets Dr. Harrison unveils is what fruit, what sweet must be avoided at all costs when you’re on Jakafi. The answer is right here.

5 Videos:  Summaries of ASH commentaries are links to a few excellent analyses by MPN specialists.

4 Snapshots of ASH meetings are links to pages containing MPNforum encounters during ASH, photos and videos with minimal or no commentary.  These are brief interviews with exhibits.  (Click on red link to access each Snapshot.)

Dr. Robyn Scherber on The Fatigue Project (Get a dog!)…

The Spring MPN Quarterly Journal will focus on CRISPR Cas9 and gene editing.

Best wishes for a Happy, Healthier and Creative 2015 from all of us at MPNforum

(New this issue!)  The List and Map of 164 Patient-Recommended Hematologists –

The Catalog of Articles. ..

Tell your story, express yourself, share your experience in your MPN magazine. You can add your comments to MPNforum articles, list your Blog, or write an article. (We’ll even help you get started.)…Letter to the Editor

© MPNforum, LLC , MPNforum.com, and the MPNforum Quarterly Journal 2014. MPNforum is licensed under a Creative Commons Attribution-NonCommercial-NoDerivs 3.0 Unported License. Unauthorized use and/or duplication of this material without express and written permission is strictly prohibited. Excerpts and links may be used, provided that full and clear credit is given to MPNforum.com with appropriate and specific direction to the original content.