For months, acquisition after acquisition, we’ve been reporting the feverish pace of Big Pharma investment in MPNs.

Even though their pursuit of the holy grail of JAK inhibitors may be designed to serve larger markets,  for good and ill MPNs are the first target of opportunity.

Remember that tsunami of cash headed toward the shores of our MPN  Village?  We can only hope you made it to higher ground because here it is flooding our media as drug companies buy their way into MPN markets, new marketing campaigns buy up search engine space,  new players arrive with new PR ploys, and new businesses belly up to the trough.

MPN and money are not strange bedfellows, Virtually all significant advances in MPN discovery and medical development have been funded by private labs or corporations, universities or National institutions.

There has always been a smell of money around research grants. In clinical trial, a corporation uses stockholder money to foot the bill for medical staff, patient recruitment, supplies, and electricity and often throws in major perks, honoraria, consulting positions, and assured fame and fortune for a select few.

It’s taken for granted a return on that investment is expected. It would be hard to establish true objectivity of clinical investigators, physicians and institutions despite any rote full disclosure statement that might be made.

But in the midst of this overheated marketing blitz, little of that applies to the new breed of for-profit commercial enterprises that has sprung up to serve the MPN market.  Now there are openly commercial, profit-making corporations peddling MPN information and services to patients and physicians.

Some are good – even very good – and useful.

Either way, with the loss of transparency and oversight and the open introduction of profit motive, the information landscape for MPN patients, caregivers and healthcare providers has changed forever.

Content marketing is the common thread linking these new commercial MPN businesses along with much professional marketing.  In content marketing, the material offered on the website or in printed literature is the draw. The sponsor and sales pitch is either invisible or barely visible.  We’re familiar with this technique from ads, book offers and handouts.

The Incyte literature rack brochure, My Guide to Myelofibrosis is a good example. Solid information on identifying and coping with MF, how to read a CBC, good for a physician to offer his patient.  A tip-in card offers free membership in My Life with MF, educational support. No mention of Incyte’s MF drug, Jakafi.

A familiar example of content marketing by non-profit sponsors is the series of YouTube videos offered by the Mayo Clinic featuring Dr. Ruben Mesa.

Solid, required information delivered with impeccable professional reserve.  They have been, rightly, the basic go-to text for MPN patients and probably some of our physicians.  Produced by the Mayo Clinic. 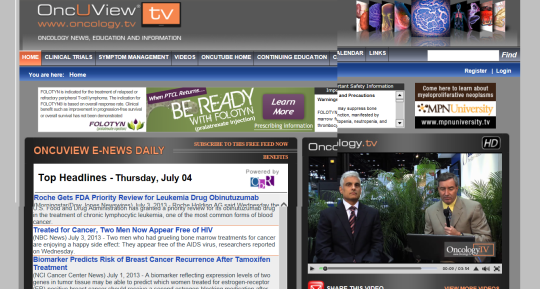 MPN University in its first appearance offers a short series of myelofibrosis Q&A video clips featuring Dr. Srdan Verstovsek and others… and a case study step-through approach for Continuing Medical Education credit.  The target audience: physicians, oncologists, hematologists. The content, however,  is readily accessible to patients as well.  Not an advertisement in sight. No pop-ups, no banners.  MPN University is part of oncuview.tv which has other target markets. The corporate sponsor is Incyte. 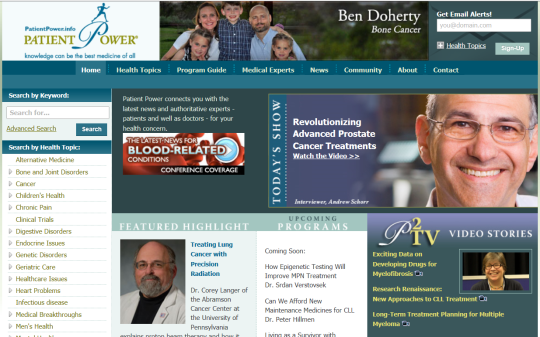 PatientPower follows international conventions and meetings of interest to MPN patients and produces video interviews with notable hematologists interviewed by owner, Andrew Schorr, himself an MF patient.  PatientPower does display advertising, most of which is unrelated to MPNs, from its broader coverage of an array of cancers. And has corporate sponsorship.

with special emphasis on its own patient-physician meetings in various cities. No advertising on the site but there appear to be, for now at least, two revenue streams, a one day patient meeting with a $125 ticket price, and corporate sponsorship.

It’s that last item, corporate sponsorship, that sounds every alarm.

The minefield of perceived corporate influence over news coverage is one area that needs to be negotiated by all these sites.

These three businesses are evolving. PatientPower’s MPN coverage has been around for a year more or less;  both MPN University and MPN A&E came on stream in the last month or two. They all take corporate sponsorship.

So when MPN University covers MF and has healthcare providers who deliver multiple short answers talking about a single product,  ruxolitinib, we’re at the intersection of two worlds.  MPN University is a profit-making business, part of another profit-making business.  The spokespeople providing content – a wall of 50 talking head videos on the page – are not delivering commercials. These are professionals who established their credentials in the non-profit, medical services arena.   Incyte is supporting the site with a grant.

In this case, the unrestricted educational grant Incyte made to MPN University was for the case study/CME portion for which registration is required. In those case studies. Dr. Verstosek delivers a comprehensive lecture, designed for physicians. His presentation is punctuated by a quiz and review in a stepped and thorough introduction to MPN diagnosis and therapy. It is an invaluable resource and Incyte is clearly listed as a sponsor.

That’s where site evolution comes in. The MPN University page, with its little 1 minute snippets from the Verstovsek lecture, with thumbnail videos of  Verstovsek’s face, just feels inappropriate. Dr. Verstovsek as clinical investigator and physician rightly enjoys enormous  prestige and affection in the MPN world.  The edited format  presents short answers to specific questions a doc might have. That’s a good thing.   Unfortunately that wall of little videos with captions looks exactly  like a series of small commercials for a sponsor’s product.

The real power and enduring value of MPN University may well be in the case study lectures and study segments. Hopefully, future presentations will provide a more appropriate path to get to them.

MPN Advocacy & Education’s website illustrates that minefield of perceived corporate influence.  When Sanofi’s PR department issued a press release announcing good Phase 3 results of its JAK inhibitor and plans to file for regulatory approval, MPN A&E gave it front page headline treatment.   This may be good news but it lacks context.  MPN patients need to know that substantiating data has not been released, let alone reviewed, and likely won’t be until the ASH meeting in November. Sanofi is a corporate sponsor of MPN A&E.

MPN A&E was started by Ann Brazeau, who previously ran the successful MPN Research Foundation seminars. She left a few months ago when the Foundation decided to renew its focus on fund-raising and scientific research and dropped its patient seminar educational  program.

“(Incyte) purchased advertising exposure that helps sustain, on a non exclusive basis, our growing MPN channel,” said Schorr. “They have no control and I have no regular contact with them. Our producers have none. We are in a lot of dialogue with their potential competitors. The more the merrier to allow us to do more and not be perceived in any way to be beholden to any company, which we are not!”

MPN University’s initial focus on myelofibrosis somewhat limits a broad-based advertising option for right now…but that will soon change as new JAK inhibitors get ready to come on the market.

producing sales meetings and educational programs.  Out of that came his North Star Creative, NSCI, a video and web production company, and a related medical education company.  He’s the owner of OncuTV, a web based video magazine focused on oncology news and a very active advertising program.  MPN University grew out of OncuTV earlier this year. From concept to launch took six months. MPN University was started with the help of an unrestricted grant from Incyte.

The MPN University idea is a good one:  Reach out to local clinicians, “educate community based medical oncologists.”   From a business, marketing, and production perspective, Bieber knows what he’s doing.  As more MF therapeutic interventions become available and his editorial mix broadens, MPN University can be a powerful resource to reach an audience critical to early diagnosis and treatment.

Patient Power is most deeply embedded in the MPN community since owner, 52 year old Andrew Schorr is an MF patient of both Verstovsek and Dr. Francisco Cervantes in Barcelona, where Schorr is based.  Experiencing Jakafi directly brings special insight into Schorr’s selection of experts.  A medical journalist for the past quarter century, Schorr started Patient Power in 2005 and focused on MPNs when he himself was diagnosed with MF in 2011.

What do they bring to the table?

Both Patient Power and MPN University offer well produced direct testimony from the highest level MPN specialists in a lively, informative video magazine format.  There are other sources for this material but these sites are well worth bookmarking and revisiting.

A small caveat:  Although it looks like journalism, there’s not much hard questioning from the interviewer in Patient Power and none at all in MPN University so the viewer has an un-vetted look at an expert opinion.  Since these expert opinions are by no means always universal an intervening gatekeeper would be valuable.

MPN A&E is evolving and considering Ann Brazeau’s obvious talents and the corporate support of three big pharmas the business should iron out any initial glitches in the road and find its way. However, despite marketing muscle, it’s not likely MPN A&E will become a credible news site without substantial changes.

The MPN A&E idea of local patient support meetings, clinical information outreach,  is excellent and something we should support, profit or non-profit.  Dr. Claire Harrison and MPD Voice have created the model with free or very low cost patient meeting.  MPN Advocacy and Education’s $125 pricetag for the Atlanta meeting is a different story.

The rest of the stated MPN A&E mission – patient support and education –  is unclear. There doesn’t seem to be any obvious reason why this business should be a primary resource for MPN patients or physicians at this time.

But there is an exciting possibility as MPN A&E evolves and refines its focus.  Both within and outside major metropolitan areas, there is a pressing need for MPN seminars for patients and physicians alike.  Given the MPN A&E founder’s trackrecord, this is a need the new firm might help meet.