by Patricia Wagner
So I know what you are thinking. . . What is this Body-Mind-Spirit connection

anyway, and who is she to tell us about this? Well, let me assure you that we are not about to untie the boat from the dock and sail off into the pink horizons of la-la land. Nor are we about to stop our treatments and start chanting together.

I’m really not much different than you in the ways that count. I didn’t ask to be sick, and have long since mourned the life that once was. Now and then I’ve been angry. I’ve been afraid, too. I accept the situation, yet I have not given up.

My disease onset began in my mid-30s. This was 20+ years ago, and I was then a busy executive living in a beach town in Southern California, loving life with my entrepreneurial husband.

As a corporate manager in a bleeding-edge technology field, I was flying frequently for business, managing an organization, teaching internally and at local universities, running my own business on the side, and if that wasn’t enough I was simultaneously completing two degrees. I was also caring for my aging mother, so far away in Chicago, now a danger to herself and others.

After an executive physical, my doctor called me at home to say that my CBC was disturbing and I should see a specialist. I bargained with him: I have a cold, I’m run down, that’s all it is. But he referred me to an oncologist with these words: “He’s the best in Orange County!”

Later, the oncologist said he would study me with periodic blood draws. He ruminated to no one in particular: “Maybe it’s a slow leak of a blood vessel in the brain. Or perhaps it’s Polycythemia Rubra Vera but I’ve never seen this before and it’s very rare. . . or maybe it is secondary PV, which can be reversed by lifestyle changes.” He conveyed no serious concern for about 9 months, then ordered an MRI of my brain, a bone marrow biopsy, and a phlebotomy.

I was up quite early that January morning in 1997 to prepare myself for a long day in Northern California. Settling onto a bench in the kitchen, I began sliding head down to my right almost to the floor. My startled husband reached over to prop me back up. Once again I slumped. I began to see double, and then triple, and as I began to experience projectile vomiting he swept me up in my red velvet robe and carried me to the car, then off to the emergency room.

Quickly moved to untensive care, I had by then lost the ability to speak or move. It seemed to me that the left side of my head had blown a hole and that my life was rushing out of it. 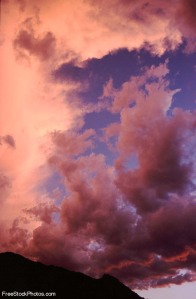 I was fully aware of what was happening as I began to leave my body. I moved toward a beautiful sunset-colored field of light in the upper corner of the room and watched what was going on down below. Beneath me, my body was surrounded by frantic medical personnel registering their shock at how quickly my limbs had gone cold.

As a person experiences physical death, one becomes increasingly aware of the preeminence of the mind and spirit. Bodies are temporary vehicles or tools. I didn’t just believe this. I knew this, at that moment. I had returned to a seemingly infinite pool of consciousness, retaining my individuality yet reunited with a larger whole. I felt that I was home. I could communicate with this larger whole, although not in words.

Time and space dropped away and I was an individual consciousness able to watch what was going on below, while still united with this infinite Presence. My life had been an unfolding story in which every minute was recorded. Now the Pause button had been hit.

I was surprised to be out of my body so early in this life, but then shifted toward acceptance. I was ready to go. I had a sense of a joy and a love that words cannot convey as I moved further into the energy field. But before I went deeper into the light I looked back and said “What about my husband?”

That very instant I snapped back into my body. My entire body, not just my head, was now wracked with pain. I was paralyzed and mute. My head was propped up with pillows so that I wouldn’t slip out of the hospital bed. I was to undergo daily phlebotomies for the next 5 days, then be released from the hospital with no explanation of what had happened.

I was not to drive, speak well, or walk without balance problems for the next ten years or so. I was rendered deaf in one ear. I had frustrating neurological problems, but couldn’t convey my concerns without hours of laborious writing to compose a paragraph I’d hand to my doctor to read. I had both short and long term memory lapses. When able to, I traveled to Mayo Scottsdale where I was told I’d had a central nervous system event, eventually described as a brain stem stroke. As my blood counts were still out of control, they began treatment for what they had no doubt was indeed PV.

About 10 years after initial onset, MD Anderson specialists made the determination I’d hoped to never hear: I had converted to Myelofibrosis. By then, my life was in a downward spiral of bone pain, body-dragging fatigue, renewed speech difficulties and prescription drugs. I was using a cane to walk, and couldn’t arise from a seated position without help. I fainted without warning, and had already presented in the local emergency room looking like an abuse victim, my eye swelled shut and face frozen with swelling after having fallen to a dead slump onto a tile floor.

I had become used to crawling from the bed to the bathroom and back during the night to reduce the risk of cracking my head on the cold toilet. Close to total shut down. Close to the precipice I’d already fallen from once before.

Finally, I decide I had given allopathic medicine every chance to restore me, and I know that it has done its best. I need more than this now.

It’s long overdue that we speak of and apply all that is known of the body-mind-spirit connection. Over the years the online MPN community has only obliquely touched upon this truth. Now we have a forum for this vitally needed discussion.

MPNforum does not try to be a triage unit for the newly diagnosed, although if you are new to this be assured that you are most certainly welcome. It is rather what the Cajuns call “lagniappe”. A little extra. And in this context we can shout to the rafters what the full story should be: We are not mere bodies of clay programmed by immutable DNA.

We are complete packages of body, mind, spirit or soul, and these piece parts are intimately related to each other. Our feelings of fear, anger, joy, harmony, peace, or agitation – our conclusions that we are good, evil, or somewhere in between – these fatigued bodies misbehaving with too many or too few blood cells flowing within our veins, with bone marrow cells that inexplicably have refused to reproduce themselves in the way that they were designed to do, in spleens that cheerfully take over for recalcitrant marrow, in livers that overflow with toxins and detritus from our bloodstreams. . . . I have learned that everything I have described just now is interrelated.

I hope that through my personal story I have shared some cause for hope. In future columns, I wish to share the latest science regarding the etiology of disease itself. Later I’ll illustrate how this cutting edge science complements what mystics knew all along. Lastly, I’ll share techniques and practices. Heaven only knows, you might even be moved to chant a bit!

I claim no superiority in this, however it seems that I have a new life. I no longer walk with a cane. I work out at the gym. My drug list is down to two and counting. I no longer faint. I’m not in pain. My new friends cannot believe I’ve ever had a problem with speech. I’ve just received a perfect CBC and CMP with my name at the top. I’m still considered to be a myelofibrosis patient, and confess to continued “pacing” to avoid the crash-and-burn fatigue I once lived with. I still have intermittent neuropathic issues.

I may ultimately succeed in little more than achieving peace in the moment, but I persist in seeing myself as well.

There are no guarantees for me or for anyone else. Some of us may succeed in spontaneous remission yet some will not, in this path that ultimately depends on grace as much as technique and knowledge. I warn you in advance that what I will share leads to a process – not a panacea or a pill.

I invite you to do this with me as part of a nurturing community of friends. Shall we try together?
© Patricia Wagner and MPNforum.com, 2011. Unauthorized use and/or duplication of this material without express and written permission from this blog’s author and/or owner is strictly prohibited. Excerpts and links may be used, provided that full and clear credit is given to Patricia Wagner and MPNforum.com with appropriate and specific direction to the original content.