Sorry to break the news, but this roving, deeply committed MPN ambassador from the British Isles is not what he seems.

We thought we owned him exclusively. Even after his stem cell transplant wiped out his myelofibrosis, he continues to work with the MPN community tirelessly. He supports SCT patients despite his occasional health issues. As a constant figure on Facebook, a contributor to the Forum and a roving intercontinental Buddy to MPN patients, how could we not have thought he was exclusively ours?

We were in a committed relationship.

Beyond buddying with SCT patients, Chris writes poems to encourage recovering patients. Here’s one to Marina, the MPN community’s Cheerleadeer Queen, who reached an early transplant milestone when her blood type changed. (She had received her fresh stem cells from a German male donor, nicknamed  Wolfie.)

She has achieved the final push

Blood gone from B to A.

Marina he has chosen

And when his male genes kick right in

Get ready for some banter

Not from a demur Jersey Lass

But a witty Greek from Atlanta.

Caught in the act

All very nice. But YouTube doesn’t lie and Chris – along with his lovely wife Lesley — was caught in the act.

Here’s how it happened. On a recent mission to a former British Colonie,  Chris was sitting in my North Carolina backyard talking about his experiences at a New York City bone marrow transplant meeting  run by BMT Infonet  “Celebrating a Second Chance at Life.”

The day was warm and windy, the little handycam was running.  And then Chris mentioned something about Tanzania.

“What were you doing in Tanzania?”

“O you know, these people out there are helping out at the Meserani Snake Park and we …”

“Snake what?” I never dreamed snakes would have a park of their own. What next?  Uber car service, time-shared cottages?

“It’s not that kind of thing…” and then Chris mumbled a bit and we went on to talk about his New York City meeting.

Later on, when I had a chance to Google snake parks in Tanzania and root around a bit, I found this photo in a documentary clip: 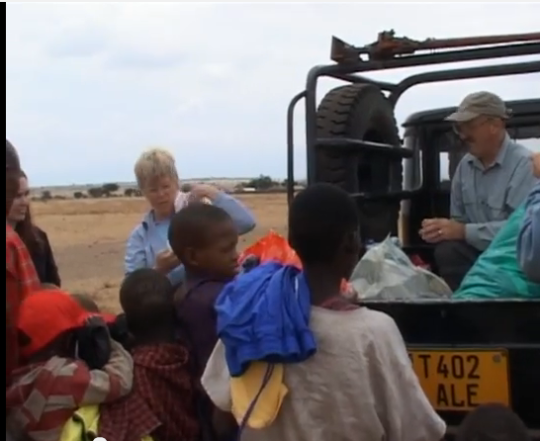 The small documentary itself was absorbing, filled with African scenery, kids, scraps of dialect, huts, and this familiar-looking couple sitting in their Land Rover handing out clothes, collected in England, to these Masai Villagers in Tanzania.

Proud of Chris and Lesley as I was, I couldn’t help feeling betrayed that his charitable impulses were not limited to our MPN community. Ah, well,  we’re an orphan disease right. We’ll take what we can get.

Even if it means  suffering the complications of  an Open Relationship.

Thanks Chris. Thanks Lesley.

©  2014, MPNforum, LLC. Unauthorized use and/or duplication of this material without express and written permission is prohibited. Excerpts and links may be used, provided that full and clear credit is given to MPNforum.com with appropriate and specific direction to the original content. All rights reserved under Creative Commons Attribution-NonCommercial-NoDerivs 3.0 Unported License.