I’ll take what I have…

In May 2002 I had just returned from a scouting trip for a film we planned to shoot throughout India.  The trip had been exotic and great fun but I began to feel tired and sluggish as I returned.  I felt increasingly weak until I was taken to the emergency room at the University of California San Francisco.  After testing, the medical team there found a parasite called Giardia in my system and put me in the hospital.

Later that evening they asked a hematologist to take a look at my blood sample to see why my Hgb was so low.  We got the results a few days after I was released.  When Dr. Lloyd Damon spoke with my wife Kat and me about the results of the test, neither of us heard the word “cancer” but we both wrote it down on our note pads.  When we left, we heard Agnogenic Myeloid Metaplasia but were happy believing “at least it isn’t cancer!”  Well, it was.

Once we had processed the information and accepted that this blood disease was real, I asked the doctors at both UCSF and Stanford Medical Center who was the most knowledgeable physician in the country on this rare blood disease.  Everyone pointed me to Dr. Ayalew Tefferi at Mayo Clinic in Rochester.  So, I made an appointment and we flew to Minnesota.

Over a period of three days, Dr. Tefferi did all the tests and recommended that I be put on three drugs:  Flouxymesterone, Prednisone and Procrit.  That combination kept me living a normal if a bit less energetic life for the next 9 years.  I continued to play tennis, golf and lived a fairly normal and active life for a guy in his 60s.  But, during that time I had a total of 18 transfusions with one or two units each time.  Other than that life was pretty normal.

Through this time I realized that my spleen was growing from something I hadn’t even known I had to, first a rather unpleasant looking lump in the middle of my belly and over the next several years to the size of a soccer ball.

In 2012 I look for all the world like the pictures you see of women in their last trimester of pregnancy.  This massive spleen interferes with a lot of my activities.  I now only remember golf and tennis and as it goes on and my blood level hovers around Hgb of 10, I don’t have much energy to do the exercise that I know is so important to my good health and wellbeing.  I keep trying but it is more difficult each month.

In October 2010 after I had moved from San Francisco to Albuquerque, NM, my GP sent me to a cardiologist who listened to my heart and reported that I now had a leaky mitral valve.  While he never confirmed that it could have been related to the almost ten years of anemia I had been suffering, statements by other physicians made me consider this as a very real possibility.  I’ll leave it to the MPD specialists to weigh in on the causes but no one in my extended family has had any heart issues and I’ve been pretty active most of my life so it is strange that it would occur after the MPD diagnosis.

I expected to do the surgery at Presbyterian Hospital in Albuquerque but the surgeons there were unwilling to do the surgery because of the reduced platelets and anemia caused by the myelofibrosis.  They referred me to either The Cleveland Clinic or Mayo in Rochester.  We visited both medical centers and simply found Mayo Clinic to be easily the most user friendly and accommodating.  I had the valve repaired on Valentine’s Day 2011.  Rochester in February is not where you go for a vacation but they did a great job and I was out and on my way a week or so later.

As I was making arrangements to go to Rochester, my GP suggested that I have a fistula put in my left arm in the event that I would need dialysis following heart surgery.  Several of my doctors said dialysis was a strong possibility after the heart surgery.  I saw a renal specialist since, as he said, “It is very likely that the dye they will use to highlight the valve issues in your heart will damage your kidneys and you may be on dialysis afterwards.

“Afterwards.”   A simple and easily understood term but what it means is “forever,” or “for the rest of your life unless you get a transplant.”  I’m did not fully comprehend the implications.  But, in retrospect, it wouldn’t have made any difference.  I was on a path and there really was no viable alternative.

And that is how it happened.  From AMM to heart valve issues, to failed kidneys and now to a spleen that measures over 30cm, interferes with just about every meal, causes chronic diarrhea and has certainly changed my physical appearance.  I look Pregnant.  Not what I had assumed would happen to me in my golden years.

In early 2012 the same cocktail of medications is keeping my anemia at bay so, for the most part, I can do much of what I had done before the diagnosis.  And the dialysis actually makes taking the medications (including a weekly shot of Epogen) easier since it goes into the plastic tubes and not into my arm.  I save my arm for those 15 gauge needles we use 5 days per week to take my blood out, clean it and put it back in.  The daily process takes about 5 hours from start of setup to the end of cleaning up and putting everything away.  It is almost a second full-time job but it keeps my blood clean and keeps me alive to live a wonderful life with my wife, family and friends.

Now that the medications are keeping me stable, the most inconvenient part of my life relates to the massive spleen and the constant pressure it puts on the rest of my body.  Because of its size, eating is very different from what it had been.  I now have a constant but low-grade set of pains where it seems to be expanding.  I’ve grudgingly accepted what it has done to my appearance – anything but sexy. 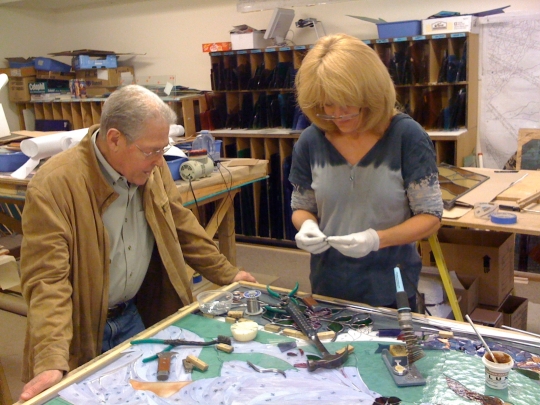 We have explored ways of shrinking the spleen:  we looked into radiation treatments but the radiologist we saw said that it was not likely to do much to improve the size and it would damage other organs in that abdominal cavity.  Since I am trying to get on the list for a kidney transplant, I don’t want to take the risk that other organs will be damaged in a way that could make a transplant difficult or impossible.

If you search around the Internet (an activity my doctors warn me about) you’ll find places where they suggest milk thistle tablets to shrink the spleen.  I tried them for about three months and noticed no shrinkage and no change other than a reduction in my bank account.

We have looked at splenectomy and the prognosis is not much better.  Since the spleen is an important part of the immune system, removal might make me more susceptible to a range of diseases that most people don’t much worry about.  And there is the recovery period of several weeks (no laparoscopic surgery possible here because the organ is simply too big).  Other drugs such as Ruxolitinib won’t work because they really knock the Hgb down and with my low level, that just doesn’t seem to be a possibility.

So, it seems I’m the round guy with the very hard stomach (but no six pack) and the low energy level who spends about 25 hours a week caring for and being cared for by my home dialysis machine.

Given the alternative, I’ll take what I have and keep searching for something to make life a bit more comfortable.  So far it is elusive.

Take me back to More Stories.

© Anthony Tiano  and MPNforum.com, 2012. Unauthorized use and/or duplication of this material without express and written permission from this blog’s author and/or owner is strictly prohibited. Excerpts and links may be used, provided that full and clear credit is given to Anthony Tiano and MPNforum.com with appropriate and specific direction to the original content.