A letter to Harvey…

You know how impossible it is to talk to someone when  you can’t see or hear him?  It’s like being It in a game of hide and seek that goes on past your bedtime.

It’s like being James Stewart talking to your namesake.

So now it’s three full months since you got your kosher new stem cells installed so maybe it’s time so say something.  A few words tapped out on your laptop, a sentence dictated to the bevy of beauties that make up your attending?  If not now, when?

I was going to talk to you about food for two minutes but who knows the state of your stomach.  Skip on down to My Summer Vacation if you’re feeling a little queasy.

I just made a disgusting pate out of hot smoked mackerel, goat cheese, pickled red peppers and onion. I was bored.  It sounded good and looked edible but now it’s lodged somewhere between my epiglottis and gastro-esophageal junction, undecided whether to proceed in a northerly or southerly direction.  I wouldn’t recommend it.

But after a couple of hours of pressure canning salsa — ingredients from my garden, mostly — I got hungry. It’s not like I make such a dynamite salsa.  I make an OK salsa. Not really great unless I find a piece of chipotle in a jar back of the fridge. Then with an overkill of cumin and too much onion and garlic I can put it together an edible salsa.

This time though I had monster tomatoes. 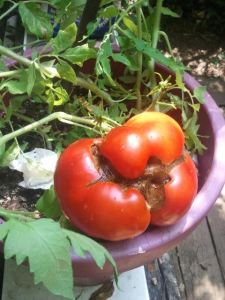 First I thought it was three tomatoes squished into one. But then I saw an entire plant filled with enormous tripartite heirlooms, over 1 lb. each.  So I figured the least I could do is celebrate by making a salsa.

Sometimes it works out.  This one didn’t.  But I planned to can salsa and already had the tomatoes cored and skinned and the pressure cooker steaming away. So I kept seasoning and tasting and stirring and putzing around until I had something.

In the end  I canned three half pints of so-so salsa.  It took me 2 hours, a bunch of electricity anda  kitchen steam bath to bring forth this limited bounty.  This winter, I’ll  probably  be happy to pop the lid but right now all it is is the most expensive salsa in town. 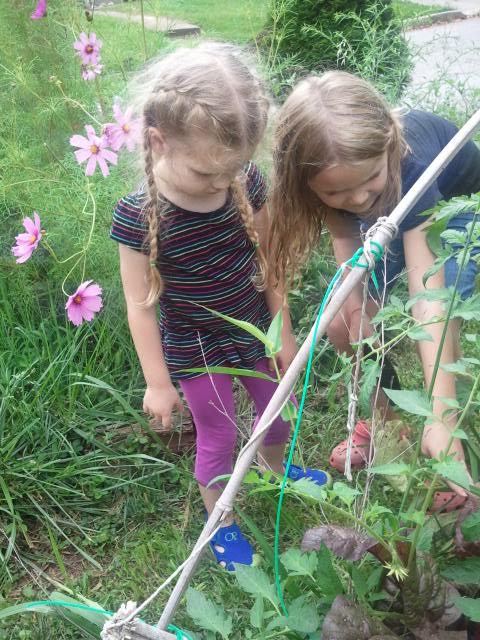 For a one-week visit from my son’s family in Florida I had a great idea. Backyard campsite for the visiting kids this summer instead of big hotel bills or collapsing air mattresses dueling on the floor.   What Zayde doesn’t have a campsite in the backyard behind the succah? 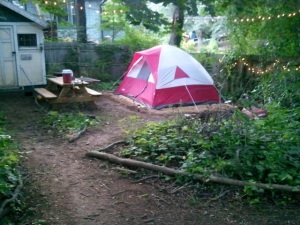 And it was fun to avoid working on MPNforum by leveling a hill, shopping for a tent, and at the end it all looked like a carnival or the First Day at Camp.

But then they left and I took the tent down 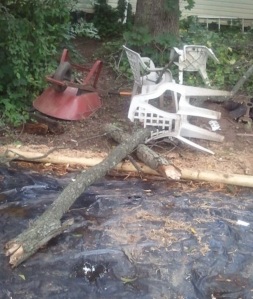 came twisting down like a drone hellfire missile, smashing the fence and one of those cheap plastic chairs you’re ashamed to show in photos before breaking into sections in masses of branch twig leaf and hickory nuts and only god know what you’re supposed to do with those.

Call me Lucky.  You know that joke, Boychik? It’s older than you are.  But just in case.  This guy meets his friend Isaac on the street.  Isaac is in a wheelchair wrapped in bandages. “Vey iz mir, Isaac, what happened?”

“What happened? I’ll you what happened. I was making love to Sadie and a light fixture fell down from the ceiling and broke my back.  Call me Lucky. That’s what happened.”

“You call this Lucky? You look like shit, you have two broken arms and you’re in a wheelchair.”

“True,” said Isaac  “But if the light fixture fell just two minutes earlier it would have broken my neck.”

There was more to the summer.  War in the Mideast. The rise of ISIL and the disappearance of the Syrian-Iraq border. Ebola in West Africa.  Racial mayhem in American streets. A new Woody Allen movie.  Many many naps And of course the enduring silence from my friend in a San Francisco hospital bubble punctured by occasional reports from his lovely consort.

I worked on my pickup truck, almost had a real date, sold my Deering Sierra banjo, and learned most of Scarlatti’s Sonata in D on piano. The patient advocate program advanced at its pig-in-a-python pace and I produced the MPNforum September issue, published September 3 (Here’s the cover photo accompanying a bone marrow biopsy tutorial by Susan Leclair:

Tomorrow is press registration for the ASH 2014 meeting in San Francisco (December 6-9).  This year because it’s being held at the Moscone Center instead of the mammoth convention centers in Atlanta and New Orleans, press credentials are severely limited.  Since 92% of the reason I’m entering the draw is to see you, I’m ironing my best shirt tonight before I make the call tomorrow.

See this is what happens when there’s no one else on the Long and Winding Road to pass in the night, no headlights coming toward me and no red taillights in my rear view mirror. I’ll just have to natter on until I hear from you.

Much love to you and your family, Harvey. .