The Muddy Waters of Money and Molecules

Geron might actually have an exciting MF drug in imetelstat.  The results hinted at in the pre-show abstract and elaborated upon in formal presentation by Dr. Ayalew Tefferi Monday, December 9 certainly suggest the molecule is a potentially potent means to roll back the effects of myelofibrosis.

Among the highlights are very high response rates, including complete response or resolution of symptoms, bone marrow fibrosis, and splenomegaly all achieved in record time.

But Geron’s flat-footed  blend of showmanship and financial antics are not helping this small pilot study build credibility as it hurtles toward clinical trial next year.

Geron briefly made a ton of paper money on December 6 when an embargoed press release was published on the Mayo Clinic website claiming extraordinary results for its Imetelstat drug.

(The release was later taken down.)  Its stock soared before falling back to realistic levels once investors realized nothing had changed.  It’s not the first time advance notice of positive company news has been fed to stock analysts and investment media.

Clearly Geron needs deep pockets to move imetelstat through the coming clinical trials in 2014 and beyond.  But scheduling a heavily promoted  on-line webcast for investors and analysts only one hour after Dr. Ayalew Tefferi’s scheduled presentation at ASH seems a bit desperate.

Despite imetelstat’s checkered career — failure in breast cancer and not much success in lung cancer, until its big boost by reducing the JAK2 allele burden in its essential thrombocythemia trial, reported last year at ASH — the drug clearly produces response. Maybe too much response, as toxicity and safety issues continue to surface. (See Slides.) However there is little doubt that the myelosuppressive activity of imetelstat has produced some partial and complete responses in record time, based on Dr. Ayalew Tefferi’s presentation at ASH Monday evening.

While clearly enthusiastic over his results, the first part of Tefferi’s presentation was marred by a long. direct attack on JAK inhibitors which seemed much more a sales pitch than a straightforward presentation of his own small investigative pilot study results. Physicians, MPN patients and caregivers know what Jakafi, an FDA/EHA approved drug,  can and can’t do.  Tefferi’s relentless focus on the limitations and side effects of JAK inhibitors detracted from answering the only questions that matter:  Does imetelestat work and at what human cost?  After claiming the lack of survival benefit in JAK2 — controversial at least since the survival benefit is supported by current research from both Dr. SrdanVerstovsek and Dr. Jean-Jacques Kiladjian — Tefferi went on at length [ tape unclear in parts, as noted]:

“These drugs are good for making your night sweats go away and shrinking your spleen sometimes with anemia but they don’t quite do it to make your cancer go away. This actually comes at a cost. You already heard of the (withdrawal? [garbled]) of fedratinib because of unexplained toxicity. You are already aware of emerging opportunist infection which is ( [garbled]) in ruxolitinib. You are already aware of peripheral neuropathy in almost 50% of patients treated with pomalidomide  So there is a cost to feeling better…”

With imetelstat infection and side effects already an issue, it would have been useful to hear more of means taken to reduce severe adverse events in the coming imetelstat trials.  Once dosage regimens are brought under control, the targeting of hematopoietic stem cells without engaging other systems will have to prove out over longer term study.  And there are good indications it will.  The on-going 18 patient ET study has some patients on drug for nearly three years, according to Morgan Lam who wears many hats at Geron.

Dr. Tefferi was not the only spokesperson for imetelstat. A last minute appointment switch from a PR person to an executive  introduced as the Chief Medical Officer resulted in an ad hoc meeting outside the press office.  The spokesperson turned out to be Morgan Lam, executive director of Extramural Collaborations… whatever that is.  Lam, however, was a credible, knowledgeable source, able to talk openly of Geron’s previous clinical trial failures and the extraordinary results of the on-going ET trial reported on by Dr. Gabriela Baerlocher last year.    He’s also a good example of the entrepreneurial small company spirit 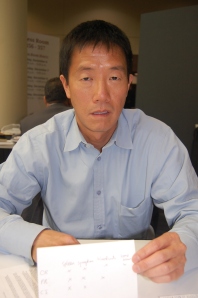 that could help drive Geron through its lumbering launch.  “Like many of us I came out of Genentech I’m very data driven.   I used to be in clinical development but I don’t do bench.  I’m in medical affairs. There’s only about 40 of us in the company..so we all do many things.”

On targeting, Lam believes imetelstat will not run into problems.  “…Most cells do not express telomerase. That enzyme is turned off except for certain stem cells and malignant cells. Certain cells,” says Lam” have more need for telomerase..for those cells, primarily hematapoietic stem cells, imetelstat will be more effective.” Lam also talked about reversal of fibrosis and the targeting of marrow fibroblasts.

In that context, here is a brief clip from Dr. Claire Harrison on the restoration of hematopoiesis and emerging data on potential involvement of the mutant JAK2 clone in precursor cells as part of the MF disease process itself.

Background  (From MPNforum article on Geron and telomeres)

Telomeres are the repetitive code at the ends of chromosomes. The main function of telomeres is to preserve the integrity of the chromosome, avoid fusion, inappropriate combination.  They’re often compared to shoelace tips.  Telomeres are also, in a sense,  the ticking clock of most normal cells. They grow smaller — less code — each time most cells divide. until a certain minimum size is reached and the cell can no longer divide and dies.

Telomerase is an enzyme that supports the survival of the telomere.   In the presence of telomerase,  telomeres maintain or elongate their structure and protect the dividing cell.The ideal target for such an attack  would be leukemic cells functioning with relatively short telomeres, cells that depend on a telomerase rich environment. Some cells, like stem cells in the bone marrow, continue to divide during our entire lives, a function made possible by the presence of telomerase.  But malignant cells can also flourish when supplied with telomerase.

In a sense, like blood to a vampire, the telomerase enzyme confers a kind of immortality on cancer cells.  Inhibiting its action would put a wooden stake in the heart of the cancer cell.  Theoretically.

Imetelstat is a technology and drug with seemingly great potential. Its ability to reverse fibrosis and restore hematopoietic function would appear to rival that of stem cell transplant.  It’s just very early — far too early — to claim victory over myelofibrosis.  We don’t know enough about adverse effects, long-term effects, durability of response or the response of a much more diverse and extensive cohort of patients in a controlled multi-site setting.  Geron needs a partner to undertake the long, expensive clinical trial process.  The sharp fall in stock price after premature announcement of findings looks like there may be some work to do on that front before development can move into high gear.  As patients, we can expect a clinical trial by the middle of next year… but it will be awhile before this whole story can be known.

Here is the slide set from Dr. Baerlocher’s EHA 2013 presentation.

This Link will take you directly to the Investor and Stock Analyst Meeting webcast and slides made available one hour after Dr. Ayalew Tefferi presented his presentation at ASH. Click on “Events” and then “Past events.”

A slide from the Tefferi ASH 2013 presentation, Adverse events 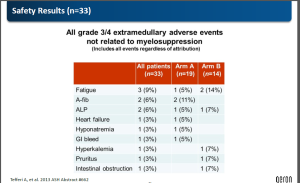 Comments on: "Geron presents….IMETELSTAT at ASH" (21)