George Church is bigger than life.

He’s taller, bushier, funnier and smarter  than any two people you’re likely to  know and bursting with visions and ideas that spin off companies, disciplines, revolutions. 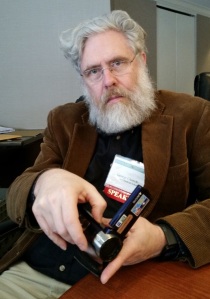 one at Harvard the other at MIT, plus a major Lab and multiple academic and corporate interests to contain him, more or less. He participated in the beginning of the Human Genome Project and is a great moving force in contemporary gene editing and genetic engineering. But for all the honor, publications, corporate start-ups, awards, inventions, and all the rest just google him and settle in for a long read..

My interest was narrower than that. I wanted to know who he was and what he thought about gene editing as an answer to  the mutations plaguing myelofibrosis patients, particularly, and MPN patients in general.

I had read his book, written with Ed Regis,  Regenesis in the days before our meeting. It’s a blend of philosophy, science and genetic crystal ball gazing that leaves the reader enlightened,  astonished and a little worried.

Still, you have to  love a guy who, in the middle of answering an interview question stops and, kindly points out “Your shutter is closed.”   Nor does he stop there. He reaches out to adjust the settings casting a compassionate, pitying look at the poor schmuck sitting across from him,  fumbling through both a scientific discipline and an elementary piece of point and click equipment.

Clearly, Church delights in his colleagues, in creative and collaborative work and the rapid progress of what is unfortunately referred to as “synthetic” biology. One of the slides he has used in a couple of presentations demonstrates how the surge in genomics 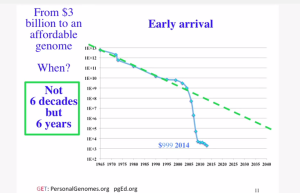 and decline in gene sequencing prices far surpassed the famous Moore’s Law that applies to electronics.  The increase in genomic power and reduction in costs that could have been anticipated to occur in 60 years actually happened in six.

He looks forward to quantum leaps of knowledge in manipulating genomes in a way that will benefit us and the planet.  “Synthetic genomics has the potential to recapitulate the course of natural genomic evolution with the difference that the course of synthetic genomics will be under our own conscious deliberation and control instead of being directed by the blind and opportunistic processes of natural selection.”

So far as I could tell George  Church’s only vulnerability is his great belief in reason as a driver of human endeavor.  While many might shudder at the prospect of synthetic genomics being under the conscious control of, for example,  the murderous  maniacs cavorting around the Middle East, beheading, bombing and otherwise discomfiting whole populations,  Professor Church seems to look forward to the perfection of our imperfect world through science, reason and mutation.     His is an optimistic outlook buttressed by hard science and high hopes.

Does that optimism carry over to the treatment of MPNs with CRISPR/Cas9 gene editing?

There are two way to go. Ex vivo and in vivo.. In both cases you want to get as high a fraction (or mutated cells) converted as possible, And you want to populate the stem cell niche. These are things we’re working on in a very geneeal  sense, We’re working on getting systemic delivery incorporated at the genomic level for a variety of cell types including hematopietic cells.

Almost every cell is amenable to change even post-mitotic ones. 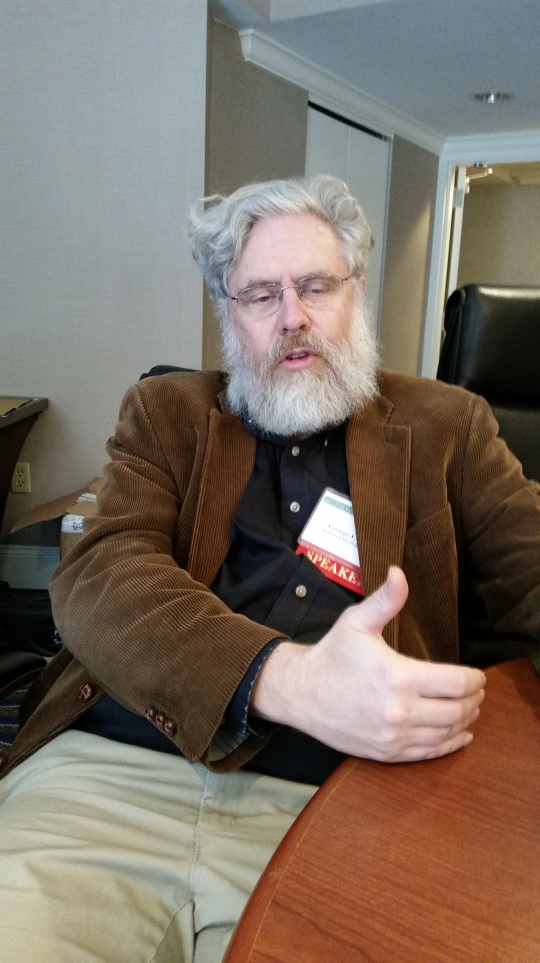 Can we replace a population of mutated genes with repaired genes?

I don’t see why not., If you want a cell to be nonproliferative then the goal of expanding it means you have to proliferate. But it can be temporary.  There are various ways you can switch it on, expand it, switch it down … It really just depends on how comfortable you  feel with making a stablely  proliferative stem cell population or whether you want to just discourage it from proliferating.

What of MPNs where the patient is heterozygous for the JAK2 mutation?

Well so, you may have heard in the Editas presentation an example of gene conversion…  You should be able to correct the defective homolog by cutting the defective one and repairing it with the correct one. The thing you have to be careful about is the NHEJ*  is a competing reaction and will eventually  wipe out the main target. But if your cleavage is site specific then you’ll get a mixture of cells which  are repaired to the correct allele and those which are hemizygous which means  they deleted one allele but still have the correct one if they were heterozygous in the first place.

What of the resident mutated population, a residual allele burden?

I think with proliferative diseases it is specially challenging.  If you wipe out 99% in principle it can rebound. You can try again but eventually it will become resistant to whatever it is you’re trying,  whether a drug, an antibody a small molecule or CRISPR.

And the suicide gene? Is there some possibility of delivering it to a mutated cell?

There are a bunch of ways you can a cause a cell to undergo apoptosis.  The problem is there will be a resistant population, either resistant to the mechanism of suicide  or the delivery and incorporation of the CRISPR … That’s nice thing with a heterogenous population where you want some of these cells to survive but others are causing the proliferative diseases.  So you hit as many as you can with whatever mechanism you can either targeted at the causative allele or targeted at the cell.

A common end point for myelofibrosis patients, particularly those who have become transfusion dependent and symptomatic, is the stem cell transplant. Do you see a role for CRISPR there?

The procedure requires ablation, highly toxic and a week or so severely weakened, immune compromised. The promise is to make the [engrafting process] easier by using their own cells, repaired ex vivo.

The nice thing about the ex vivo route is that whatever your efficiency is you can bump it up by some sort of selective process. You can say I’m only going to reintroduce the cells that meet certain criteria. It’s easiest if the change you’re trying to make results in some change in flurorescence of cell surface antigens. You can sort, selecting for the surface markers. Point is you have that opportunity to screen the population of cells before introducing them. And you don’t have that opportunity if you do it in vivo. And the fact that you can do a whole body ablation gives you a really good way of dealing with the ex vivo part…if that’s where it’s heading. —

It is a promising way to go. There two things you have to be very thorough about are thorough ablation and thorough selection.

Just to sum up, what is the applicability of CRISPR to MPNs

CRISPR is applicable to almost every organism.  Some paths are particularly challenging like any proliferative disease where there is essentially a race between the efficiency of delivery and genomic editing and advancement of the process of the disease.  I think that our goal, our ambition, is to get the delivery to the cell and the delivery within the genome to approach 100% but we’re not there yet.

Are there any promising approaches that might improve the odds?

We can select for viruses that are particularly associated with certain cell types, for example an associated virus that can change the surface properties.  There are non-viral delivery methods that are getting better. If you can lower the toxicity you can increase the dose and extend the amount of time in which the procedure is occurring and all these things  should leads to higher efficiencies of delivery. It’s  already pretty efficient within the cell but that could be improved as well.

Comments on: "George Church on synthetic biology and MPNs." (1)