It started the usual way. Raising money for transportation and lodging. Applying for press credentials. Reviewing abstracts published on line. Calling for appointments. Arranging to board my dog 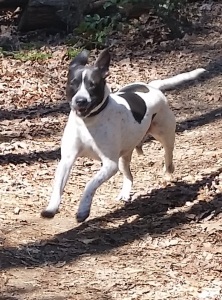 .   And then, unexpectedly, I ended up back in hospital for an emergency stay.

I was discharged in plenty of time but I wasn’t as prepared as usual as I packed and made last minute arrangements before heading out to the airport and San Diego.

In a way, though, that lack of preparation was useful. My perspective was much clearer. My calendar wasn’t cluttered.   I could review presentations on MPN drugs, attend a few press sessions, interview targets of opportunity, and connect with people long known only through my computer monitor.   Plus MPNforum had some direct participation in events. The MPN Patient Care poster, 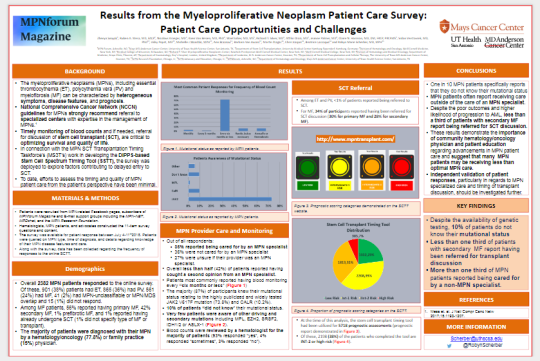 beautifully crafted by Robyn Scherber and her crew, was largely an MPNforum Project and would be on display at the ASH Poster exhibit,. And the SCT Spectrum Timing Tool ( another MPNforum initiated project, this one  sponsored by the MPNRF and supported by a blue ribbon panel of transplanters, hematologists and SCT survivors)– would be announcing additional capabilities at ASH.

And then, of course, a few questions might be answered.. Would Pharmaessentia’s Ropegintron move closer to FDA approval?  Is Pegasys really going to be withdrawn now that its Hep C market has found a new and better drug?  Would Geron finally fold it’s MPN tent after Johnson and Johnson walked away from its financing deal in September? Are CTI’s Pacritinib and Gilead’s Momelotnib ever going to be on our pharmacy shelves? And what of the resurrection of Fedratrinib now that Sanofi handed it off to a company seemingly formed for the acquisition and  flipped it a few minutes later to some other company for continuing trial.  It’s a long and tedious story and by the time it resolves let’s hope MF will have already succumbed to immunotherapy,

Instead of realizing any of those good intentions what I faced was sheer exhaustion in an overbooked, crowded San Diego Convention Center, presentations taking place at conflicting times, long and hopeless distances between events.  Friday night, before the Meeting kicked into high gear, was The Incyte/CURE MPN Hero dinner.  Arriving late, I squeezed in at a table and mimed greetings all around as the sound level on stage was pitched to heavy metal concert levels.

The dinner was a chance to catch up on some of the good folks working to help each other in the MPN community, to meet old friends, Dave Denny and Ann Brazeau, Barbara Van Husen. And  then suddenly the posthumous tribute to Robert Rosen, Foundation founder and good friend, exploded on the overhead screens with music and mixed media home movies, the shock of recognition, tears and renewed regret at his loss.

All this was an exhausting opening salvo to the days ahead, that would involve trekking through poster and exhibition halls, meeting and interview rooms. The open recruitment for clinical trials 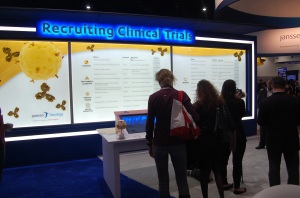 seemed a bit in bad taste. Here were hematologists from around the world scarfing down warm chocolate chip cookies ( a new and common feature at several booths) while juggling espresso (another perk courtesy of exhibitors) shopping for experiments for their patients?

Saturday morning I met Barbara Kurtz face to face after years of working together on the Forum. We compared notes, illegally toured the poster exhibit as she charmed our way past security guards, took some photos and headed back to the press room for lunch.  (Yep freedom of the press goes hand in hand with a free lunch.) Her story is in this issue.

In contrast to sitting in dark conference rooms 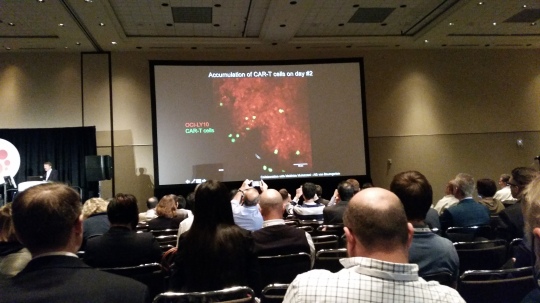 looking at giant monitors and photographing dimly lit presenters, I popped into the 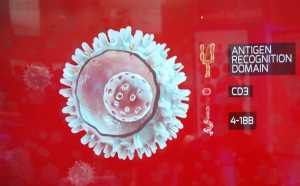 Novartis exhibit and was treated to my first Virtual Reality experience.  A mind-blowing journey through a CAR-T immunotherapy treatment. (Chimeric Antigen Receptor in the genetically altered T cell)  Like that old movie of a miniaturized submarine transiting the human body…only this was real, inter-actable, and a little daunting.

At one presentation, a panelist allowed that a high degree of certainty was required before proceeding to turbo-charge a patient’s immune system since, among other factors, a Novartis produced custom CAR-T (they’re all custom) cost $330,000.

That night I would meet Jeremy Smith in person, 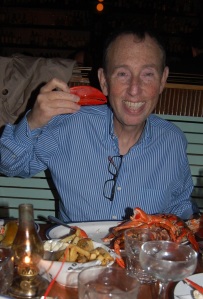 another long-term Internet buddy. It’s complicated to find a living person walk out of the computer monitor and sit opposite you cracking lobster claws for his dinner. Complicated because it’s just as you knew it would be, the exact person in simply an added third dimension. He reminded me of something he once wrote that is well worth re-reading,

But there was a true, practical and game-changing discovery at ASH…and it didn’t come out of the labs.

ASH is famous for reporting, year after year, on the revolutionary developments in progress as clinical trials of breakthrough drugs wend their pig-in-a-python way through to nowhere.  This year was different!

This year there was a truly disruptive, breakthrough changing the reputation of ASH forever.

Four or five years ago the end of a grueling day at ASH would spark a mad scramble for buses lined up at the curb in the near dark as clutches of hopeful passengers waved fruitless hands at passing, occupied taxis.  I was part of that crush in Georgia, San Francisco, Orlando, etc. (I missed out last year, sidelined at the last minute.) So imagine my happy surprise to see physicians with shopping bags filled with programs, papers and hematologic merch strolling calmly out of the Convention Center at the end of the day,

Uber, of course.  In a few short years this ap driven transportation solution became universal, swooping down on command in a clean late model vehicle, the driver named on one’s cell phone, for a personal pickup and delivery.  It was painless, quick, and cheap. And it solved an unrelated problem: ASH housing,.

Housing at ASH is a bit like the pricing of drugs. There is no limit or even reason driving the exercise beyond profit,   Why it should cost $300 a night to spend maybe six or seven hours sleeping and showering a few blocks from the Convention Center is more a function of the 25,000 or more competitors for that bed than any reality of cost.  Not only that, since the “Hospitality” arm of ASH locks up all rooms in the general zip code of the meeting, requests for accommodations are centralized, expensive, and quickly unavailable.

Another ap — Air BnB — had filled in the gap for me in that past, but not this time.  Full house from SeaWorld to Downtown, Luckily, Uber to the rescue…and it no longer matters whether or not I was on any of the slow Shuttle Bus routes to the 60th Annual ASH Meeting. Because for $8.30 or thereabouts Uber would pick me up and drop me off, door to door.  Of course you knew all that already… but for me it was eye opening..

For three days I counted on Uber to ferry me back and forth from the cheap seats in the outer ring of available motels and back to the Convention Center by the Bay.

It took a chance encounter to underscore the pointlessness of the ASH rush hour scramble to catch presentations and meetings. I had a meeting scheduled with Dr. Richard Silver 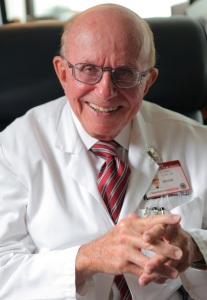 at the Donor’ Lounge in the Tides.  Wew 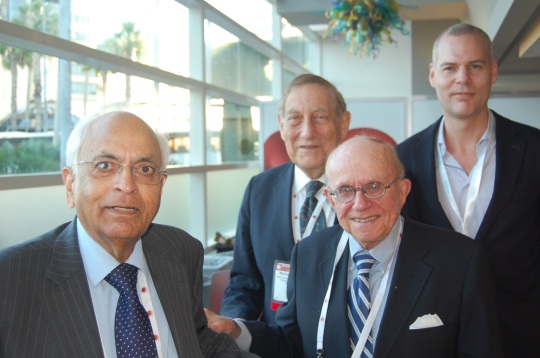 A different revelation hit me in that room.  I had arrived early and was going through notes when I saw a live video feed of Dr. David Steensma lecturing on a drug  for MDS on an overhead monitor..

I sat through many presentations

featuring investigators reading from prepared text and clicking through slides. Not only would it be, for me,  more efficient to read through the transcript but why couldn’t I be watching this performance from a monitor in my hotel or even home for that matter.    (ASH does make videos available immediately after the meeting.)

ASH really is for networking.  Questioning Presenters and discussion with colleagues is another part that can’t be done via streaming video,.  But how am I going to explain to my dog Dave that he was shipped off to a kennel for four days because I had a couple of questions for someone I never asked in any case?  And given the chaos and over-scheduling of events it has become increasingly difficult to connect informally with friends and colleagues.

So with ASH off my calendar for 2019 I find myself with an open slot after Thanksgiving.  Next year end of November, instead of warm chocolate chip cookies, posters, and long treks down crowded corridors we’re going to head out to the desert and watch the sun light up the dunes.  I’ll leave ASH for younger legs.

Here’s the link for webcasts, videos and other on-line educational materials from ASH… just in case you want to join me in not attending ASH 2019   Home /https://ashondemand.org/Meetings/Annual-Meetings 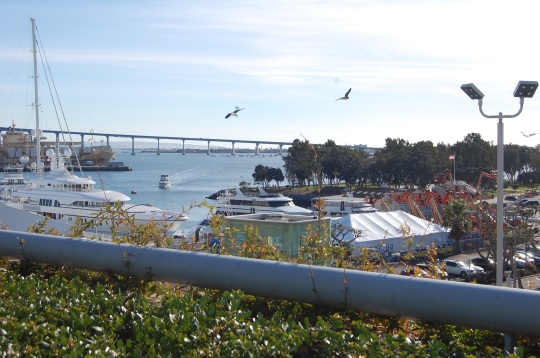