I often find myself discussing ‘tummy troubles’ with people who come to see me in my professional role as an Accredited Practising Dietitian (APD), at my Melbourne based community health clinic.

So be warned, talking about bathroom habits and all that goes with it does not trouble me as a clinician. Please read on, if you have finished your Granola or muesli and you are feeling strong enough to learn more about ‘tummy troubles’ and MPN symptoms.

Irritable Bowel Syndrome (IBS) is very common with 1 in 5 adults experiencing the unpleasant symptoms, which include abdominal pain, distension, flatulence, and altered bowel habits with intermittent constipation and diarrhea. Having any of these symptoms does not necessarily mean you have IBS, so it is important to have medical investigations to exclude other gastrointestinal conditions such as coeliac disease or diverticulitis, before a diagnosis of IBS is confirmed.

Even though a link between eating certain foods and gastrointestinal (GI) symptoms has been well-recognized by IBS sufferers and health professionals, there has been a lack of good evidence to support dietary changes to help manage IBS, until recently. Research at Monash University in Melbourne, by Dietitian, Dr Sue Shepherd, and Gastroenterologist, Professor Peter Gibson has found that some foods that contain rapidly fermentable, short-chain carbohydrates or FODMAPs (Fermentable Oligo-, Di-, Mono-saccharides And Polyols) can cause IBS symptoms (Low FODMAP Diet Information).

These researchers found that in some people with IBS, poorly absorbed short-chain carbohydrates remain in the GI tract longer than usual and are fermented by intestinal bacteria, causing gas. These unabsorbed molecules increase the osmotic pressure within the GI tract, drawing in fluid. Both the increased gas and fluid within the GI tract lead to the classic abdominal symptoms of IBS. Tests are now available to identify malabsorption of short chain carbohydrates (fructose and lactose) by measuring breath hydrogen after drinking a carbohydrate solution, following an overnight fast.

IBS, FODMAPs and MPNs: Is there a link?

Prior to my diagnosis of essential thrombocythemia (ET) in 2008 and later my progression to polycythemia vera (PV) in 2010, I had experienced the unpleasant symptoms of IBS for many years, which I had tried to manage myself. As my patients with IBS discussed their medical and dietary histories during consultations with me, I realized my symptoms were often worse than theirs and that I needed to ‘practice what I preached‘ and get my own IBS formally diagnosed. I don’t think I am alone in finding it embarrassing to discuss my GI function (or malfunction) in a consultation with a health professional. (My 15-year-old son Josh says, “The thing that makes me nervous about a Gastroenterologist is the ‘enter’ part!”)

I eventually plucked up the courage and made an appointment with my GP. Firstly, I asked him to screen for coeliac disease, which was thankfully negative. He referred me to a gastroenterologist who performed a gastroscopy and a colonoscopy. These tests were normal except for some inflammation my colon, however the cause of this finding was unclear. He prescribed an antispasmodic, Colofac. I had breath hydrogen tests performed, which confirmed I had both fructose and lactose malabsorption, so I put myself onto a strict low FODMAP diet.

For me, the low FODMAP diet was only partially helpful in improving my GI symptoms. This intrigued me, because many individuals I saw with IBS responded very well to these dietary changes and over time, many were gradually able to reintroduce higher FODMAP foods back into their diets, as we established their individual levels of tolerance. For me, however, the low FODMAP diet seemed to heighten my sensitivity to high fructose and lactose foods and I noticed that my occasional dietary indiscretions resulted in an exacerbation of my GI symptoms. 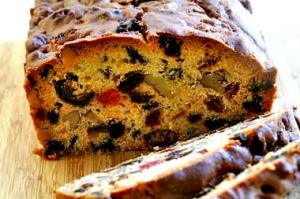 Despite being a Dietitian (and contrary to many people’s image of a Dietitian) I, like most people, enjoy indulging occasionally, in foods that are not the healthiest for us. My particular weakness is fruitcake, however, from a low FODMAP point of view, fruitcake is a no-no, because it is high in fructose (from both the dried fruit and the wheat flour). After commencing a low FODMAP diet, I found if I weakened and enjoyed even a small piece of fruitcake, I paid the price gastrointestinally, with an exacerbation of symptoms that were severe enough to disrupt my night’s sleep.

At about this time, my MPN symptoms worsened, with frequent headaches, dizziness, fatigue and muscle aches. In October 2010 my Hematologist confirmed my ET had now revealed itself to be PV, and he advised I commence venesection and cytoreductive treatment (see September issue of MPNForum). I chose to take Hydroxyurea (HU) initially, and after a few months I switched to Roferon Interferon (IFN).

During this time I continued to follow a strict low FODMAP diet. As a Dietitian, I found it embarrassing in social situations to have to decline certain foods, and to explain why I needed to follow a special diet. I felt self-conscious and did not want to offend my hosts or to be perceived as a fussy Dietitian, by avoiding their delicious food. When we were invited to dinner parties, I would phone ahead and let my hosts know what foods I needed to avoid and I would offer to bring dishes we could all share. Most people were very understanding but I felt uncomfortable with the inconvenience and restrictions that the low FODMAP diet imposed, while missing out on many foods I enjoy.

After 3 months of treating my PV with HU and venesection, I travelled to Phoenix, Arizona to attend the 2011 Joyce Niblack Memorial MPN Conference at the Mayo Clinic. I ordered gluten-free meals with no onion for the flight, as this is the closest I could get to a low FODMAP diet with airline food. At the conference I chose suitable options from the breakfast buffet.

By the lunch break on the first day, I left the lecture theatre with a ravenous appetite after a long morning of fascinating scientific lectures. One look at the lunch table and I realized the delicious looking whole wheat turkey and salad sandwiches were going to severely challenge my low FODMAP diet restrictions (as wheat is a source of fructose)! However, my hunger and the knowledge that we had a long afternoon of lectures ahead, before the evening reception, convinced me to dismiss my fears of the likely consequences of indulging in this high FODMAP meal. Resigned to enduring the likely GI consequences later, I took a sandwich and joined my fellow conference delegates to chat over lunch. To my surprise and relief, l tolerated the sandwich extremely well and did not suffer GI consequences later as a result of eating it!

Over the next few weeks I gradually challenged myself with higher FODMAP foods, which had previously provoked unpleasant symptoms, to find I could now tolerate them much better! By this time my blood counts were better controlled after several months on cytoreductive treatment. Two years after my PV diagnosis my blood counts are well controlled on Roferon Interferon (after juggling various doses of HU and IFN for the first 18 months after my diagnosis) and I am very glad to report my GI issues have totally resolved and I do not experience IBS symptoms from eating high FODMAP foods.

IBS is very common and is a multifactorial condition for most people. It causes great discomfort for sufferers, but does not lead to lasting GI damage or contribute to the development of serious GI conditions, such as cancers. MPNs however, are rare, chronic, hematological malignancies that originate in stem cells within the bone marrow. MPNs are characterised by an over production of one or more cell lines, leading to elevated peripheral blood counts, and they carry the inherent risk of progressing to more serious hematological conditions over time. Therefore, IBS and MPNs would seem to be unrelated conditions, however, in my case, treatment of my PV and consequently improvement of my blood counts, was followed by sustained improvement in my IBS symptoms. There has been no specific research done to study a link between IBS symptoms and MPNs. My view is that some type of inflammatory mediators linked to my elevated blood counts may have caused my IBS symptoms. I conclude that these compounds have decreased since my PV is better controlled, and this has resulted in sustained improvement in my GI symptoms to the point where my IBS has completely resolved.

Nevertheless, whether my IBS was causally related to my MPN or was just a coincidental finding I am very pleased to now be able to indulge in the occasional piece of fruitcake, without suffering GI consequences. I am also glad I longer need to consult a gastroenterologist because as my son commented, they make me nervous!

I am interested to hear from other individuals with MPNs who have experienced resolution of IBS/GI symptoms following diagnosis and treatment of their MPN.