Brain fog and the new normal

A post-transplant letter from Beatrice Larroque

I knew recovery would take a long time, it would probably take a year, I thought, maybe even longer…

It seems I was a little naïve, but how could I really have known? One year sounded like a really long time, but everybody is different, everybody’s journey is their own and can’t be compared with others’. In that sense, it is a very lonely journey, in a totally unchartered territory, and no guide to get us through, just a general idea of what could or could not happen from other’s experiences. 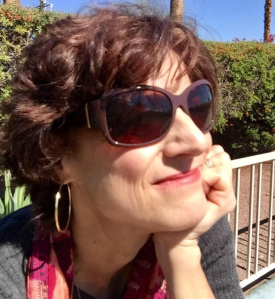 By all appearances I seem healthy, as long as I manage to conceal the dark raccoon eyes that are still sticking around. People look at me and think I’m “past the whole ordeal”,  that I am cured, “normal”, they say, or at least I seem to be, on the outside. And even though I am still struggling with enormous fatigue, stomach issues, chronic GVHD of the mouth, with dry skin, mouth, eyes, and more, and that I need an immunoglobulin infusion every 3 to 4 months, these are all relatively minor things with which I can deal and around which I can adjust my life. If that’s the price I have to pay, I’ll do it gladly.

But there is an invisible hurdle, one with which that I have a lot more difficulty dealing and accepting.

Last week, I underwent 6 hours of neuropsychology testing, and today I had my feedback.

The executive function part of my brain, my working memory, my organizational skills, are severely impaired.  Most people who go through chemotherapy treatment are affected to one degree or another. In my case, almost 1 ½ year after my rebirth, I forget what I am talking about in the middle of a sentence, I go somewhere to, say, get something, and when once there I get totally sidetracked because I forget that I was looking for something. From my own newfound ADD I have gained a lot of empathy for my son and people like him with ADD, which was a totally foreign concept to me that I could barely imagine on an intellectual level. I sometime just cannot process what people tell me, or what I read, I know I know all the words but I have no idea what they mean; so after I ask people to repeat what they said a couple of times I stop, feeling too embarrassed to let them know I don’t understand, and I remain quiet, which can be perceived as being rude; or I’ll stop reading this incomprehensible sentence and hope I’ll understand it the following day when I am a bit more rested.

Because my working memory is so impaired, I have developed a hierarchy of important information to store in the minimal space I have available, that means I may have to ask the same questions over and over, because I’ll forget the answer immediately, which annoys my kids to no end. If too many pieces of information come my way in a short amount of time, I suddenly feel extremely overwhelmed and get dangerously close to the edge of panic; at that point I have to take a step back, close my eyes, take deep and slow breaths, and call it the day.

Call it a day… that has never been part of who I was. I always believed about pushing through, I always believed you could always take one more step, and then another. Mind over matter. There was no choice, my mind had to push my body through what life kept throwing at me, over and over. I always prided myself in being very well organized, the “queen of multitasking”, that was me. No matter what hurdles and how many of them were thrown my way I was always able to slow down and immediately organize a list of priorities in my mind, without being fazed. I am not saying it was easy or that I always enjoyed it, but I was able to do it and push forward. Mind over matter was my life, and I just did it.

Today, it is not so, and it is makes me feel terribly impaired, handicapped, diminished. I do not recognize myself, and it is hard to make peace with it.

The neuropsychology doctor suggested a few tools to help: ADD medication, Occupational Therapy to learn palliative tools and techniques to accommodate and work around my impairment, Mindfulness practices, a book… The likelihood of my brain functions getting better is slight if not unlikely, but at least it is probably not going to get worse, nor is it the beginning of dementia or Alzheimer, which is the best news of all.

To make matters worse, just like when I was explaining the effects of MF on my life to people who often responded that they knew what I was talking about because they felt the same way, thus greatly minimizing what I was going through (No! no! no! they didn’t!! But how would they know, they were just trying to related and make me feel better, and they didn’t know that it just made me feel like I had to defend the fact that I was really sick and that they had no idea what that meant!); today, I hear again the same kinds of answer: “I go through the same thing, it’s normal at our age, we are getting older after all, etc… “ And again, NO! It is NOT THE SAME!! Yes, I’m getting old too, but unless they had chemo treatment or brain injury, IT IS NOT THE SAME! I remember something my teacher said in my Abnormal Psychology class years ago, we all do things that could be classified as “abnormal behaviors”, but it is a matter of degree and how much it disrupts your life.

And this greatly disrupts mine.

So, once again, I am finding myself in this awkward position where I have to defend and assert the fact that I am not well, and that they cannot, should not, compare their experience to mine, because, no matter how much they want to make me feel better and show me they understand, it is not the same.

I have heard much about the “New Normal” post transplant. To me, that never meant much, I have no idea what my “old normal” would be. I have had ET since my early 20s, MF since my late 30s/early 40s, add to that a nightmarish marriage, horrific divorce, raising kids alone, working full time, struggling financially… who wouldn’t be tired in this situation? Was it my MPN or my life situation? Or was it, more likely, a combination of both? I have been tired all my life, I have been pushing through no matter what, I’ve lived “mind over matter” through any situation, for my whole life, until my body couldn’t take it any more and the need for an SCT had become inevitable. My life pre-SCT has never been “normal”, so I didn’t have much expectation as to what the whole thing really meant, I was just hoping I’d feel better, be able to function, and have the possibility of a future to live.

So, this “New Normal”, does it mean, for me, impaired mental abilities?

I just realized these past few days that I have to start talking about my impairments to the people close to me lest they find me rude. I need them to understand I am not doing it on purpose but that I am simply not aware that I ask the same question over and over, or that if I’m not responding to them it is because I cannot comprehend what they are saying and I am too embarrassed to ask them to repeat again.  I need them to know I am not dismissing them but that my brain, at some point, simply cannot register anymore.  I need them to be understanding, tolerant, and kind toward their mentally diminished and impaired friend, I need them to know and accept that this is my new normal.