The 58th Annual Meeting of the American Society of Hematology, San Diego 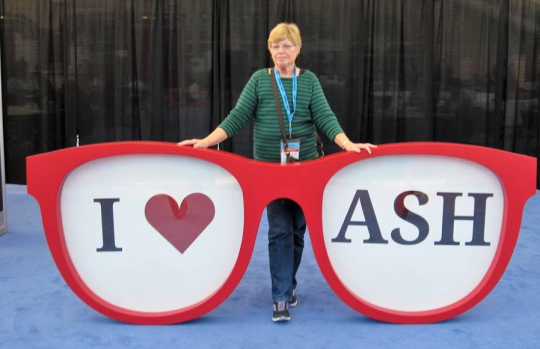 The ASH Conference, in a word, was overwhelming. The San Diego Conference center is three stories high and at least 4 blocks long. And every inch that wasn’t taken up by Starbucks booths with long lines and Annie’s Pretzels was taken up by hematology exhibits, 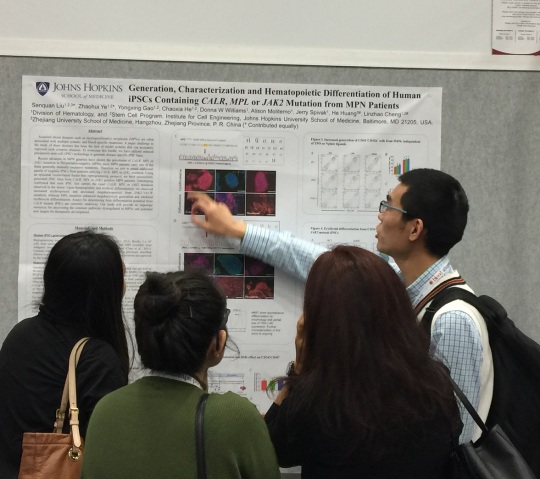 posters, conference rooms and interview rooms. And a press room. Even with all the conference center space some sessions took place in near by hotels.

On the bright side they had ushers at every entrance, hallway and outside meeting rooms, to help you find your way.

There were people attending from all over the world as attendees and presenters to introduce and talk about their research or how they were applying the research to patient treatment. There were pharmaceutical representatives

showcasing their company and introducing new drugs coming down the pipeline for various hematology diseases. There was a large cavernous room with poster abstracts. There were well known people in the field as well as students and early career hematologists queuing up for special training sessions. There was even a treadmill room with monitors trained on presentations.

San Diego itself did a fine job providing good weather and no fog. I missed the ASH Foundation run/walk along San Diego Bay, but watched the taped version on the shuttle bus that took me back and forth to my motel. Technology was present everywhere from apps one could put on their smart phones to dial in technology for those who couldn’t be present in person. Every session I went to was taped and will be or already is available.

When walking around —  and there was a lot of walking —  I could overhear people in many languages making new contacts or planning lunch with known contacts. There was excitement and energy in the air.  While walking around I was so excited to find a FedEx place on the first floor and immediately decided to send Zhen a package or two of the information stuffed in my back pack  including the premier issue of

Blood advances, an open access journal published by ASH. Despite all the technology, a lot of trees died.  I traveled to San Diego by Amtrak and was trying to figure out if I could carry it all up the stairs to the second floor of the travel car.  Other people also had the same idea to send things and the line was almost as long as Starbucks.

The organizers did a fantastic job scheduling and getting out the information along with daily briefings. The press room was set up with information and a daily lunch. And the ever present urn of coffee.

I enjoyed meeting with Dr. Angela  Fleischman,  (UC Irvine Health School of Medicine) and Dr. Robyn Scherber, research affiliate and consultant at the Mayo Clinic, Scottsdale AZ. and currently doing a fellowship at Oregon Health and Science University.  We discussed what I think is an exciting research project they are beginning on diet and MPNs.  I also met Dr Ruben Mesa, well known MPN specialist from Mayo Clinic, Scottsdale AZ. who is consulting on both the nutrition study and the yoga study.

Zhen was grounded so I was the only one from MPNforum attending ASH. He introduced me to some of his contacts by e-mail which is how I connected with Barbara Van Husen, president of the MPN Research Foundation.  We are both named Barbara Ann and spent some time trying to figure out how many Barbaras we knew under 50 as well as attending the PharmaEssentia/AOP presentation and trying to decide where the hydrea vs. interfuron research was at.

There was so much to see and learn and only so much time it was hard to pick and choose. My biggest takeaway was that there are a lot of bright enthusiastic people working hard and collaborating to find treatments and cures for blood disorders. It gave me hope for the future treatments if not cures for the MPNs.