As promised, a dispatch from the front lines of ASH.

This won’t be definitive. For that,  I need to get back home to download video and photoshoots, absorb notes and papers. This is just a first impression shared with friends, fellow patients and caregivers. We’ll get an MPNforum ASH issue out before Christmas.

For me, this neighborhood is where it began. 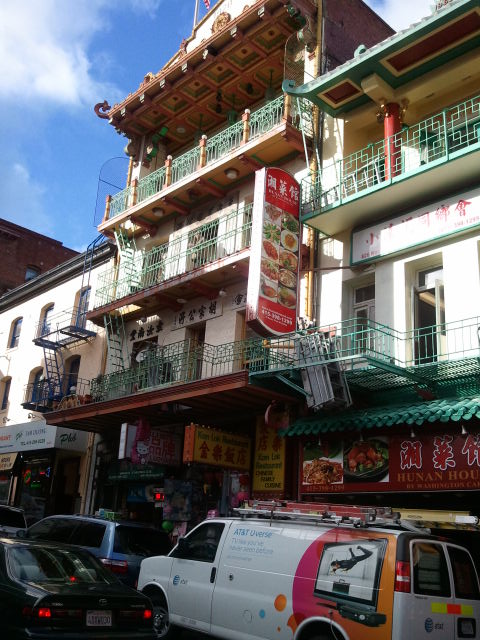 They call our hotel  the Hilton Financial District but really we were 20 yards from this street in San Francisco’s Chinatown…and for two days had a long shlep over to the Moscone Center’s ASH headquarters, often along with PV Reporter’s David Wallace.

The distance and competition for attention between this colorful, dynamic city and the intense, crammed hematology proceedings at ASH is mind numbing.  Just as the endless trudging among ASH venues –meetings and sessions, scientific and educational — at the Moscone South Central and North, the Yerba Buena Gardens, the Intercontinental, Marriott and splendid isolation of the Press Room is exhausting to flesh, bone, and spirit.

This morning, the last morning for me of hauling shoulder pack  and tote bag with papers, cameras and equipment from from ASH meeting to appointments,  everything hurts.  Whether it’s age or MF is hard to say.but just wrapping things up is curative.  What was distilled out of this five day marathon is a much clearer view of where we are and where we’re going…and the world of possibility ahead of us. And it’s good to sit down in my Air BnB cottage and share these impressions via Chromebook and sketchy Wi-Fi.

Unlike last year’s ASH that concluded with the crashing thunder of CALR revelations from the labs of Tony Green and Robert Kralovics, that saw the Imetelstat fireworks and the beginning reports of combo Ruxolitinib trials this ASH seemed one of consolidation, a few very promising developments, and increasing domination of Incyte’s Jakafi in MPN therapies   Our understanding of the driving mechanisms and mutational landscape has significantly advanced…but, in general, clinicians and scientists alike remain at a loss to explain most of what works and why.

Summary: Characterization of MPN disease, descriptive prognosis of survival, more precise measurement of MPN related fatigue all have advanced over last year. Immunotherapy is definitely the hot item this year  Some of the head to head drug trials — notably, Momelotinib vs. Jakafi and interferon vs HU– seem to have sputtered for a while but are back on track now.

There is still no patient voice at ASH.  25,000 hematologists and patients talking to each other about what works in diagnosis and treatment of patients with no input from us, no participation in reporting impacts and concerns.  And, while there is much greater unanimity in expressing dismay at cancer drug pricing there doesn’t seem to be any determined effort to do anything about it.

The most revolutionary discovery for me happened far from the hurly burly of ASH.  I set out for the Berkeley campus offices of Dr. Jennifer Doudna to see if the CRISPR/Cas9 gene editing techniques we discussed in our lead article last month could be applied to correct MPN mutations.

Essentially the CRISPER/Cas9 approach would edit the mutation out of our DNA — snip it out directly through the Cas9 enzyme linked to an RNA homing sequence — and replace it with a healthy stretch of DNA produced in vitro.

Although Dr. Doudna’s work was published just two years ago,  there are now a raft of new studies in this near universally accepted technique and  human clinical trial scheduled for next year in sickle cell anemia. We publish our interview in the next issue but head over to http://innovativegenomics.org/ to see what kind of collaboration the Berkeley scientists have in mind working with MPN clinicians.