SPECIAL REPORT – Getting to ASH

This Special Report is dedicated to the MPN patients who participated in experimental clinical trials.  Some suffered and died during dosage and toxicity testing or before cross-over to effective drugs was allowed. Some have been denied treatment in the service of Science. As the tyrosine kinase inhibitors move out to treat much more common diseases, our small MPN family stands among the first volunteer patient communities to permit wholesale testing of these experimental drugs.  Even at this early stage, their courage has brought hope and relief to us all.

Atlanta isn’t far from my North Carolina home in the Blue Ridge Mountains.  Sherman and his armies were able to march from neighboring South Carolina to the city in a matter of days

My objectives were more peaceful.  I just needed to report MPN developments presentedd at the 54th Annual Meeting of the American Society of Hematology.

At 5AM on a dark and deeply fog-draped morning last week, I drove down Interstate-85  to interview, photograph, listen…and by the time it was over I could say, like General Sherman… “We rode out of Atlanta…and reaching the hill, just outside of the old rebel works, we naturally paused to look back upon the scenes of our past battles. … “Glory, glory, hallelujah!”   Back in Atlanta, I had seen the brilliant, hard work  of so many scientists, physicians and technicians around the world conspire to make real advances in understanding our MPNs.  Symptom relief is already at hand and reversal of fibrosis and ultimate cure is in our crosshairs. It was impossible not to feel hopeful…if not jubilant.

But before that rousing hallelujah chorus could be sounded, there were the foggy crests of mountains to negotiate in the dark Carolina morning, some 250 miles from the capital city of the new South. Squinting to piece together the road ahead from blurry white lines and absent shoulders lit by headlamps wrapped in the gauze of mist, I headed for  ASH.

ASH is not just a Conference. It’s another Nation. A passport should be required to attend.  An estimated 25,000 hematologists did just that, flying in from all latitudes of the globe to participate in this three ring circus event that combines performance, glitz, professional exchange, and the marching band drumbeat of Big and Little Pharma.

Think combination World Cup and Super Bowl crossed with opening night at the Met and the World’s Fair.  It was big enough to fill the Georgia World Convention Center…a cavernous building with enough acreage to house four Georgia Dome Stadiums.

It’s about blood of course, and its disorders. And no wonder the event draws a crowd.  Few substances on Earth are more universal. Even fruitflies have hematopoietic systems.  At ASH, the science is impressive and exhaustive, the product of universities, world class labs and medical institutions. Reputations and fortunes are on the line as long-awaited research papers are presented and obscure posters see the light of day in a packed halls crushed with passing PhD’s, MD’s, investors, critics, sales reps and academics.

At the end, there will be both celebration and blood on the floor.

The MPN sideshow at ASH contained a rich mix of exhibits,  long-awaited reports from the JAK front, primarily.  There were also posters  from genetic explorations of telomeres to proteins and novel therapeutic approaches but we came for the meat and potatoes of drugs that could help us and our friends now or pretty soon.  And we weren’t disappointed.

For the MPN community, there would be news of solid advancement.

To round out coverage, there was a lot going on outside the convention floor… a meeting with Dr. Richard Silver the guru of Interferon and a global thinker whose work encompasses virtually every major development affecting myeloproliferative neoplasms…an interview with  James Smith, V-P at Canada’s YM Bioscience poised to present findings from the Phase I/II clinical  trials of CYT387 (formerly, Cytopia)…and reconnect with friends and associates, most notably  Robert Rosen and Barbara Vanhusen  the dynamic (and unpaid!) duo that leads the small MPN Research Foundation team that searches out promising science and has provided almost all the important private sector, non-commercial or academic funding for MPN research in recent times. 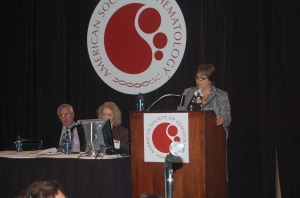 I hoped to run into Dr. Moshe Talpaz and Dr. Claire Harrison, scheduled to present studies on Jakafi’s impact on longevity and data on the efficacy of the drug at lower platelet levels and find out what  Sanofi’s JAK entry is all about…plus  get up-to-date on Incyte’s plans from Pam Murphy.

So that’s what follows.  Come with me to ASH, my MPN ASH anyhow, and get some sense of what this event, so absolutely critical to our therapeutic options now and in the future feels like through the  eyes of a fellow patient.

Buckle up and pack comfortable shoes.

Comments on: "SPECIAL REPORT – Getting to ASH" (2)