With changes at the top, help may finally be on the way. But for now…
Clinical Trials Can Be Dangerous to Your Health.

Sometimes we just don’t have a choice. Or think we don’t, which is pretty much the same thing.

We’re out of options, sick, can’t afford the drugs that probably won’t help us anyhow. And here’s this clinical trial opening up, with high hopes for a new drug.  So we or a loved one step up for one last shot.  I’ve been there.. That was before I understood how this clinical trial business works.

For one thing, the odds are against us. 92% of drugs never make it through to approval. Too toxic or too useless.  If we get on to the trial we can’t be sure we’re getting the wonder drug or a placebo or some alternative. Between side effects, the hassle of travel and record-keeping and the passage of time, regardless of what drug we’re given we are likely to come out the other end in worse shape than we went in.

And then, of course, as in the last two big MPN trials, we can get booted off at the very end with no explanation, no supply of meds, not even carfare home. Welcome to the hardball game of clinical trials USA.

The FDA says they are frustrated.  The agency would really like to let us know why it suspended the pacritinib trial so abruptly. It can’t. It’s prohibited by federal regulation.

Sorry, says CTI BioPharma. It would really like to give us the pacritinib data but it can’t.  Releasing it now would jeopardize the trial.

Why do we not howl in outrage at these responses?  The “data” they’re talking about areour lives, our dosing with their drugs, our deaths. To get these data we had to be measured, bled, poked, thumped, scanned, hospitalized and buried. These aren’t their data, this is our life’s blood quite literally. These are our data.

The Clinical Trial system is so flawed, expensive, slow, error-prone, risky  and flat-out flaky that the surprise isn’t that 92% of trials are a bust…but that any drugs make it through at all.  The justification for the system —  rigid scientific validity of matching up groups of patients to compare responses to  drug vs. placebo or best available therapy–  is a joke.

Between exclusions and special inclusion requirements, it is almost guaranteed that participants will not mirror the general population.   Add our genetic and lifestyle differences to the mix and we have additional challenges to the universal validity of clinical trial findings. .

Beyond all that, compliance and oversight can be spotty enough to skew results or even  result in injury and death to participating patients.

MPN patients have been spared much of the clinical trial horror since we have few candidate molecules queuing up to be tested on us.  In the past nearly two decades, only two drugs cleared FDA — anagrelide and ruxolitinib. (For the record, other related drugs, for application in  CML, reducing blasts in AML, and preparing patients for SCT have been approved.)

The last two myelofibrosis drugs being tested, Sanofi’s fedratinib and CTI BioPharma’s’ pacritinib, blew up on the launchpad after working through all three clinical trial phases leaving participating patients without support or good options!

This is potentially good news as Califf is a strong advocate of  pragmatic clinical trials, designed to gather more useful data by observing broad populations in real-world settings.

But he arrives with some significant baggage, potential conflict of interest that is systemic within the clinical trial system. 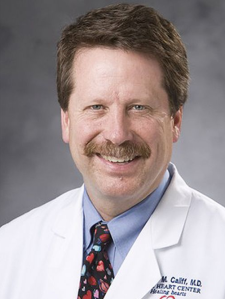 Big Pharma turns to academics and physicians  to consult and to test drugs. And pays them well.  While at Duke, Califf was chancellor of clinical and translational research. In that capacity he “received millions in funding and salary support from Merck, Novartis, Eli Lilly, Sanofi and other drug companies.”  Califf told Time Magazine less than half his salary came from pharmaceutical industry funds.

He was also co-director of the Xaralto clinical trial in which defective equipment may have given that test drug an edge over its rival.  The equipment was pulled by the FDA. The drug was approved…some say over FDA ispector objections and patient lawsuits followed.  The FDA is investigating.  Details of the Xarelto affair are widely available in the media and there’s not much point in raking it over here.  But to have the key figure in that troubled trial  head up the FDA when it is investigating the trial he himself directed could give the appearance of putting the fox in charge of the henhouse.  Let’s see how it works out.

Truth is, virtually every MPN specialist involved in research and clinical trial has some substantial financial relationship with one or more drug companies and this inevitably close relationship has been the subject of endless debate and seminars.   Beyond professional ethics, there is no firewall between specialists and the  drug industry. The practice of making financial disclosures in publications and presentations is just formulaic since experienced researchers and physicians need to be engaged with Big Phama at all stages of drug development. Moreover, as patients, we want our most experienced and trusted hematologists to have a hand in investigating and reporting on new MPN drugs.

All that said, the receipt of very substantial funds from drug companies by our physicians and institutions is one of the factors corrupting the clinical trial system. Those drug billions dumped into clinical experimentation support major medical institutions that treat us, pay a good portion of medical salaries and overhead. When our own doctors, our own institutions, are on the Big Pharma payroll, no matter how scrupulous and professional they may be, we have to fear the deck may be stacked against us.

Let us be clear-eyed for once about this clinical trials industry.  We have a blood cancer, not some delusional brain rot. In pursuit of godawful profits, lusting after the blockbuster drug, Big Pharma pours billions into research and development. They are not in it for our good. Mother Teresa isn’t CEO of Big Pharma. They are in it for money, big bonuses, stockholder profit, personal profit.  Do we need more evidence than the $10,000 bankrupting monthly price for the only approved MF drug? The $100,000 pill?  A medical care system staggering under the greedy pricing of meds?

We’re sick and vulnerable. We need meds when none are available. We enter an experimental clinical trial to get drugs we could not afford even if they were approved.  And in the overwhelming majority of cases these are drugs that will never be approved.

And yet the data are not ours to see.  Simple truth:  Most sponsors of these clinical experiments do not publicly report their results even years after trial conclusion. Those unreported results are our unreported pain and suffering. So even if you are willing to sacrifice your health for the good of the others, think again.  In the very great majority of clinical trials, resulting data will never see the light of day.

Neither the federal regulatory agencies nor the sponsors of drug trials are primarily concerned with our well-being. Need proof? Look no further than the pacritinib trial.  This clinical trial was pulled abruptly and totally by the FDA without consultation with investigators on the trial, and without consultation with patients benefiting from the drug. By any measure, this is a shameful instance of regulatory over-reach.

The very idea of the FDA asking patients – that’s us, the laboratory mice in these drug experiments – what we think or feel about them removing our lifeline drug is bizarrely unrealistic.  Who cares?  Patients are subjects, isolated, sick, and submissive. But not even to consult the physicians running the trial defies reason.  Unilateral action in MPN clinical trials:  Big Pharma did it last time.  FDA did it this time.

Until we stand up for ourselves, until we resist this risky clinical trial system, we will remain victims.

If we must sign Consent forms let us carefully review them with our own physician.  (In fairness, the Sponsor should also sign a Consent form agreeing not to terminate a trial solely for its own corporate convenience.)

We have few weapons but they are powerful.   If possible, we can decide to avoid clinical trials. We can organize to reform this system. We may die, we will die, but  dying at home or hospice may be a better option than spending our last days suffering as a subject in another busted clinical trial.

Of course we need them to produce effective, safe drugs. But they need us to keep their bloody machinery in production.  For now, they need to feed us into the Clinical Trial maw to churn out their statistics and profit-making drugs. They entice us with promise of miracle cures and free medicine. We have linined up for endless clinical trials of useless or worse drugs.Where are the miracle drugs? Where is the free medicine?

Why is there not a more equitable, contractual model governing clinical trial?  If Sponsors can’t provide effective, safe drugs in these human experiments, then patients should be compensated for pain and suffering in clinical trial. And if the trial somehow succeeds, then patients shold be provided those drugs for life and made available to other patients at a reasonable price.

Clinical trials have to step out of the darkness and become more inclusive and transparent. Bring patients into the process as full human partners.

As things now stand this broken, antiquated, corruption-ridden and dangerous system is dangerous to our health and needs to be reformed. The world will look back on these clinical trial years as times of ill-conceived and badly run massive human experiments exploiting the most vulnerable in a risk/benefit game with terrible odds.

For us, for patients, the way is clear but most of us are not likely to take it.  Our need to stake everything on the prospect of a few more days, a few more breaths for ourselves or a loved one is too great.  Still…some of us, some of the time,  can make a start at reforming this faulty clinical trial machinery.

If not now, when?